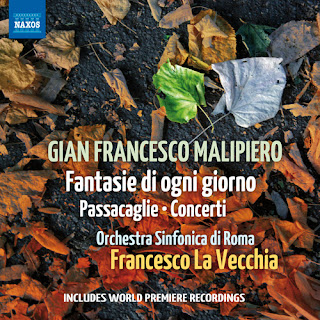 Naxos has been putting out a sizable amount of music by Malipiero (1882-1973) and that turns out to be a good thing. I missed his music for the most part earlier and am now trying to catch up. The current volume covers orchestral works from the middle and earlier period, in a program named after the centerpiece work, Fantasie di ogni giorno (Naxos 8.573291).

Francesco La Vecchia conducts the Orchestra Sinfonica di Roma throughout. The music and performers seem well-suited to each other, as the renditions are spirited and dynamic.

This is less the ultra-modernist composer of the later period but nevertheless shows Malipiero as expressive and appealing. The liners make note of a "tipping point" in his stylistic development in 1952, when increasingly chromaticism and eventually 12-tone structures come to replace a diatonicism. We can hear the initial later period in the first two works on the program, the "Fantasie di ogni giorno (Everyday Fantasies)" from 1953 and the "Passacaglie" from 1952. Rounding out the program is a nine movement "Concerti" from 1931. The latter two compositions enjoy their world premiere recordings here.

Yet even the earlier period's diatonicism sounds in no way backward looking. All have a contemporary quality. The "Concerti" show a great deal of lyrical sound color and drama as each movement for the most part features concerted music for various sections of the orchestra.

The "Fantasie" according to the composer was a series of ideas he was working on, almost like a musical diary, that he decided to present as a whole. They show no traces of not belonging together, however, so perhaps there was more of a unity of purpose than he himself was aware of consciously in the first stages of writing. It is a work of great interest.

The "Passacaglie" like the "Fantasie" documents the beginnings of Malipiero's increasingly expanded tonal sense. It is a dramatic work filled with no small amount of sturm und drang.

That Malipiero composed over such a long period, covering nearly the entire first three quarters of the 20th century, means there is a great deal to hear and that development went in tandem with the longevity. The three compositions offered in the current program give you a taste of just how much there is to appreciate. This may not be (if there is one) the single disk of Malipiero's orchestral works to get. You need some of the later music, too. But it certainly brings us more and very pleasing evidence that his music is central to an understanding of the rise of modernism in 20th century Italy.