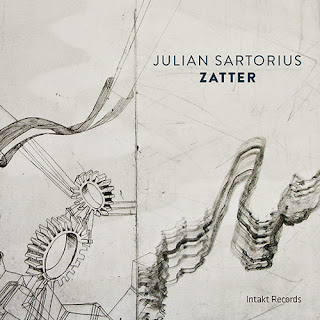 Julian Sartorius, avant drummer-percussionist, embarks on his second solo adventure with the album Zatter (Intakt). I have yet to hear his first, Beat Diary, which consists of 365 pieces covering a full year of sound art. He has played with various Euro-improvisational new jazz groups including the trio of Colin Vallon as well as Co Streiff & Russ Johnson's quartet.

Zatter consists of 14 improvised entities that end up sounding more in the realm of new music than percussion in the rhythmic or jazz-oriented sense. According to Sartorius, "Zatter" means in old German "the disorder when things are strewn all around." That perhaps is ironic because each piece has a fairly clear sonic palette, each unto its own. Nothing is overdubbed or involves the use of electronics. In all Sartorius in the course of the album produces sound complexes from various combinations of drums, cymbals, spanish goat-bells, gongs, vibrators, rubber balls, sound bowls, bull-roarer, shruti box, lumbers, glockenspiel, kalimbas, tubes, mbira, and metals.

Things can have a periodicity but few have anything overtly drummer-percussionist-rhythmic about them. The few that do have greater interest to my ears. He is highly inventive and each piece has such a way about it that often one spends time contemplating how he made the sounds. Sometimes it seems as if bowing is involved; other times there is an ambient sort of vibratory feedback sound that gives one a feeling of being in an electronic zone.

Ultimately this is a credit to Sartorius and his ingenuity. It fascinates but ultimately does not hang together so much as music as it does percussive experiment. That is something in itself. Those with a very adventurous soul will probably respond. Others may not.