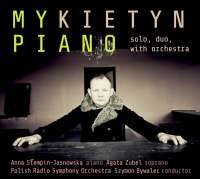 When something could be said to be post-modern, it often means it is multi-stranded stylistically. The original definition of the category assumes this. The music of Polish composer Pawel Mykietyn (b. 1971) fits this definition admirably, as heard on the four-work release My Piano (Accord 194-2).

Through the program pianist Anna Stempin-Jasnowska is the focus and she is a poetic and interpretive cornerstone of the Mykietyn approach to the instrument. She belongs together with this music.

Altogether we get a vivid impression of the composer in the period from 1992 through 2000. The works show us a basically tonal but presentationally modern sound with an impressive variety of syntax, from neo-classical allusions combined with dramatic electronics on "Epiphora," to dramatic pointillism on his "Concerto for Piano and Orchestra" that gradually obtains a complex piano-orchestra mass of very moving motility before quieting to a tender introspection in the second movement, then going on to a blaze of modulatory brittleness and restless grandeur in the final movement. A beautiful work it is, eclectic yet so in a very personal way.

The "Four Preludes" show at times a flirtation with minimalism (also heard in "Epifora") which turns more to a quotation than a way of composing. The music refuses to sit still yet has a logical expression inherent in its eventfulness. There is a romantic element but it is not typically backward looking as it is used as a springboard for Mykietyn's own sort of grand gestures. And his own sort of expressionist dramatics come to the fore in ways quite exciting.

The "Shakespeare's Sonnets" give us through-composed complexities that again have multi-stylistic components including some intervallic leaps that segue nicely to the Concerto that follows.

Ms. Stempin-Jasnowska is ever a beacon of light in this music. Soprano Agata Zubel and the Polish Radio Symphony Orchestra under Szymon Bywalec sound very appropriate and effective.

In short this program satisfies with music that is original, tonal yet thoroughly contemporary, dramatic, movingly presented. The piano writing has an unforgettable singularity. The music as a whole strikes me as rather outstanding. Now I would like to hear more by Pawel Mykietyn. This program will I suspect do the same for you if you seek the promise of the beyond yet revel in music of an advanced tonality.

Mykietyn makes a difference by daring to be different.