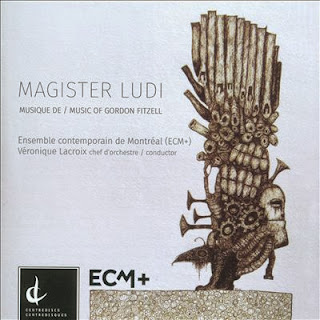 Every new modern composer you encounter forces you to start from the beginning, to blank the mind of expectations and let yourself open to what will come. Canadian composer Gordon Fitzell and his five-work album Magister Ludi (Centrediscs 20414) filled in the blank slate with some excellent high-modernist chamber music. The Ensemble contemporain de Montreal (ECM+) under Veronique Lacroix handle the performances with exceptional verve and creativity and the recording has first-rate presence.

Fitzell has come up with a notation system that structures the music yet allows the players improvisational latitude. From all aural appearances this is a fortuitous circumstance as the ECM+ rise to the occasion with music of considerable interest.

The five works performed on the CD cover a fair amount of time (from 2000 to 2014) yet go together quite seamlessly. "Pangea Ultima" has passages that show an affinity with avant jazz improv. (And the presence of Francis Houle, as well-respected avant improvisor, has some effect on that.) The bulk of the music has a distinctive spatial sprawl and fully high modernist abstraction. It does not suggest Darmstadtian serialism as much as it fits in with the more open-formed sounds that came after.

And so the hour-long program that includes the title work "Magister Ludi" (named after Hesse's provoking "Glass Bead Game" novel, for flute octet plus cello), "violence," "Flux" and "evanescence," the latter of which combines the ensemble with an electronics score, give us much to appreciate and contemplate.

This is serious, abstract, well-crafted modern chamber music in the grand avant tradition. The sound colors are vivid and the music excellently paced. Based on the recording Gordon Fitzell establishes his sound. He is a contender among the new, advanced style composers for the pantheon of most worthy Millennialists, I would say. Time will tell. In the meantime hear this album by all means. ECM+ sounds brilliant and the music no less so.