Haydn, The Seven Last Words of Our Saviour on the Cross, Jeno Jandó, Solo Piano Version 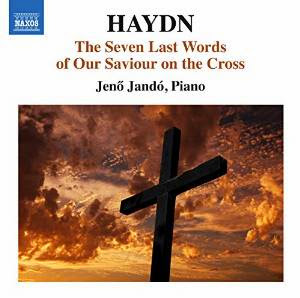 In the course of this blog I have had the opportunity to review not one, but now three versions of Joseph Haydn's The Seven Last Words of Our Saviour on the Cross. There has been the version for string orchestra, for string quartet, and now the solo piano version performed by Jeno Jandó (Naxos 8.573313). Why I have jumped at the chance to review each time becomes increasingly clear to me. There is perhaps no more harrowing scene in the biblical literature of Christianity than this. Jesus hangs on the cross, in agony. He expresses himself seven times, ranging from the needful cry "I thirst" to the heartbreaking "My God, my God, why hast thou forsaken me?" There is perhaps nothing more disturbing and dark than that moment, duly revisited every year in the Christian calendar.

That Joseph Haydn was commissioned to write a work on these last words for performance on Good Friday was fortunate, in that in dealing with the expressive power of this scenario he was pushed to the edge of the classical style he so brilliantly espoused. There was no question, for him, about writing the sort of work he did so well. Instead there are nine slow movements in a row, mostly in the minor mode, allowing him to express in his very own classicist way the tragic last moments of Jesus on earth as human, his earthly death.

Haydn's Last Words and Mozart's musical depiction of Don Giovanni's descent to hell in the opera of that name press two of classicism's greatest composers to the limits of classicism. If you compare what they did musically to romantic and later periods, you see clearly that classicism put strictures on expression that romanticism and later modernism eased significantly. I am thinking of Faust's ride to hell in Berlioz's The Damnation of Faust and Penderecki's hell-like musical depiction of the entombment of Christ in his Utrenja. Both Berlioz and Penderecki were freed progressively from the restraints of classicism to much more emotively expressive and anxious music. The effects are that much more thoroughly overwhelming, perhaps, and yet going back to Haydn you appreciate the challenges he had remaining true to the feelings of the narrative he was depicting yet staying within the conventions of musical meaning that were a part of his times.

And so the Seven Last Words manage to say so much. They are as dark as any classical work, as expressive (though of course Haydn's sturm und drang symphonies pioneered a heightened expressivity in the period) as anything you might hear from the era. If you were to look to a more or less clear expression of meaning in the musical syntax of the era, here is where you would find it.

But in the end his innovations in form and the literal program he was depicting make sense in the great power of the music. It is here that you find Haydn at his most starkly sublime. And the solo piano version perhaps even more so has a starkness inherent in its unrelenting pianism, its voluntary limitation of sound color, its limitation of pitch range at times to the center of the keyboard, only to burst forward ever the more dramatically as the higher and lower note options come in calculatedly to express contrast in a dark landscape.

Jeno Jandó gives us a performance that does not attempt to wow us with bravura panache. Such a display would destroy the dark and somber aura that Haydn lays out for us so brilliantly. Jandó puts all the expressivity needed into the music and no more. This is the proper reading to my mind. It is in the restraint that the sorrow comes through all the more. That most certainly was Haydn's intent and it in part is what makes this work so haunting. And when the music calls for it the more agitated expressive passages stand out all the more clearly.

So bravo to Jeno Jandó for this moving version. Very recommended.

Email ThisBlogThis!Share to TwitterShare to FacebookShare to Pinterest
Labels: classicism at its expressive limits, classicism vs modernism, haydn the seven last words of our saviour on the cross solo piano version jeno jandó gapplegate classical-modern review, meaning and music