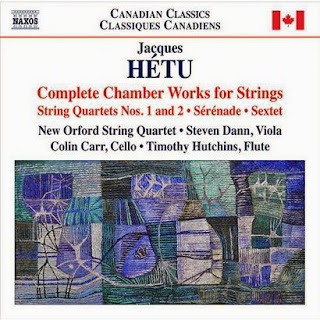 Jacques Hétu (1938-2010), a pupil of Dutilleux, Messiaen and Lukas Foss, spent a lifetime composing and teaching in Canada. We come upon his music today in a most rewarding anthology of his Complete Chamber Music for Strings (Naxos 8.573395), as played by the New Orford String Quartet and guests.

This is serious, abstract modernist music of excellence, composed over much of his career between 1960 and 2004. The String Quartets No. 1 (1973) and No. 2 (1991) begin the program. They move out of the rarified, masterful territory of Bartok, Carter and Ligeti to occupy their own aural space. They alone are worth the price of admission, for they are significant and something to behold-hear. The string writing calls for virtuosity and passion and the New Orford Quartet realize it all with precision, grace and feeling.

By 2004 Hétu had become a bit less atonal but no less impactful as we hear from the lovely "Sextet, Op. 71," a work both pleasingly stringent and lyrical. In between we get shorter works that show both the hand of a master in the making and that of the made on the "Adagio and Rondo" from 1960, the "Scherzo" of 1992 and the haunting "Serenade" for string quartet and flute of 1988. The latter has an almost Bergsian depth of passion. It reminds me ever so slightly in the opening section of Berg's wonderful "Violin Concerto" yet does so strictly on its own terms.

At no point does inspiration flag. This is music we who have a commitment to the modern and the new should know, a disk we should have. The performances are no less effective than the music Hétu constructs so impressively.

Modernists take note. Jacques Hétu deserves your attention. You can hear the evolution of his style over his career on this program, and you like me will no doubt appreciate the various phases and want to hear more.