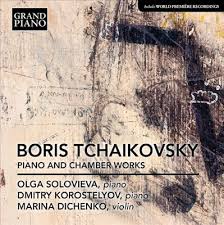 Tchaikovsky. Boris Tchaikovsky, that is (1925-1996). He is unrelated to the one who wrote "Dance of the Sugar Plum Fairies." He nevertheless is a composer of note, one of the modern Russians we did not know much of over here until recently. Turns out he is a voice in his own right. We get a sampling of his piano and chamber works spanning 45 years of his output, from youth to maturity, in Piano and Chamber Works (Grand Piano 716).

There is no mistaking his work with that other Tchaikovsky. There is enough of the modern spice there to mark him of the last century. On the other hand he is not especially radically modern. There is a pretty pronounced tonal bent but it is tempered enough with some ventures into expanded tonality. He studied with Shostakovich and Miakovsky. The liner notes mention a large number of works we do not get a chance to hear over on this side of the world: four symphonies, four concertos, a number of other large orchestral works, six string quartets, 50 movie soundtracks, and some chamber works.

The present volume gives us his "Sonata for Violin and Piano" from 1959 plus a good number of solo piano works, some in first recordings, covering the period from 1935 to 1980. Olga Solovieva and/or Dmity Korostelyov do the honors for the piano parts; Marina Dichenko takes on the violin part for the sonata. They sound well.

I will not run down the list with a description of every piece. There are too many and they encompass too much for easy encapsulation. Suffice to say that Boris shows a lyrical and at times bitter-sweet character that fits him in with much of the modern Russian school, though there is nothing that shouts imitation at you.

There is plenty of good music to be heard here, enough to please anyone with a penchant for Shostakovich and Prokofiev et al who would be open to a worthy example of some other composers who did good work last century.

Definitely recommended.
Posted by Grego Applegate Edwards at 5:03 AM