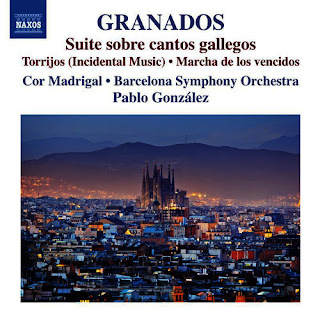 Ever since I came across an LP of Granados' piano music early in my music explorations, I have appreciated his Spanish-tinged melodicism, his impressionistic colorfulness. Today's CD looks at some of his lesser-known orchestral works (Naxos 8.573263), namely his "Suite sobre cantos gallegos (Suite on Galician Songs)" (1899), his "Marcha de los vencidos (March of the Defeated)" (1899) and his "Torejos (Incidental Music)" (1894). The latter includes a choral part nicely realized by Cor Madrigal; the rest are for orchestra alone and the Barcelona Symphony Orchestra under Pablo Gonzalez do a fine job with it all.

All three works are not often performed these days, though in the hearing of them we do not find anything lacking. Two were written when at 33 years old Granados was establishing himself as one of the foremost composers in Spain in his day. "Torejos" was composed a few years earlier. All are witness to his very effective incorporation of nationalism with neo-romantic and impressionistic influences. The recording commemorates the 100th anniversary of his death and apparently will be followed by others later in the year.

The Suite is the more lengthy and ambitious work, making great use of folk song elements, but then the "Marcha" and "Torrijos" are effective and very tuneful as well.

Perhaps none of this falls into the category of irrefutable masterpieces of the Spanish modern period (his "Goyescas" are undoubtedly that) but they are extremely attractive works that bear close scrutiny. Anyone who already knows and loves Granados and the flowering of the early modern period in Spain will take readily to this music. It is charming!

Recommended.
Posted by Grego Applegate Edwards at 5:10 AM