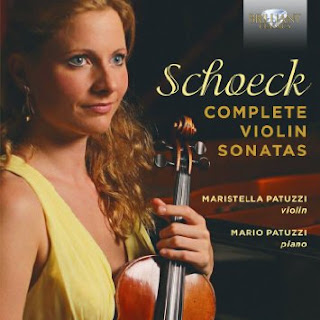 If the music of Swiss composer Othmar Schoeck (1886-1957) is perhaps not as well known as it deserves to be, it no doubt has something to do with the tumult of the era in which his musical career began. He was of the generation that came to age when a stylistic crisis was in the air. The very nature of the musical language was at stake. He shared with such generational luminaries as Webern, Berg, Stravinsky, Bartok, Kodaly, Casella, Pizzetti and Szymanowski the need to devise personal solutions to the malaise of the times. (All this can be gleaned via the excellent liner notes to the album at hand.)

Schoeck was well prepared via studies in the Musikschule in Zurich and then several years under the tutelage of Max Reger in Leipzig. The composer ultimately found a neo-classical modernist approach with a rhapsodic, yet expressionist flair.

His Complete Violin Sonatas (Brilliant 95292), as played with great charm and grace by Maristella Patuzzi on violin and Mario Patuzzi on piano, cover early and somewhat later periods of his work: the "Sonata in D Op. 16" from 1909, "Sonata in E Op. 46" from 1931, and the "Sonata in D Wo022," written in 1905 and revised in 1953. We hear in the "Sonata in E" a more modern approach. The other two sonatas are delightfully lyrical and romantically effusive though never gushingly so.

The works show both the youthful and the more mature Schoeck, a talent with substantial inventive abilities. It is music that is decidedly worthwhile and beautifully played. He was of his time yet not comfortably classed as a radically advanced stylist. Yet there is great beauty and substance to these works. The Patuzzi's give the music near-definitive performances. It is most certainly a good introduction to the composer if you do not know of him. And the music wears well.
Posted by Grego Applegate Edwards at 5:08 AM