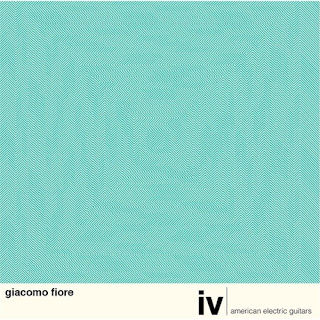 The electric guitar for various reasons does not always get the full attention it deserves in new music composition, as compared with the piano or the violin, etc.

Four contemporary modern works are realized with style and great musicianship, showing us, as the liners state, "The wide range of timbral, contrapuntal and expressive possibilities that the instrument has to offer." That is for sure.

Eve Beglarian's "Until it Blazes" (2001) was designed for "any plucked or keyboard instrument and dual delay." It has a natural, round-like polyphony through the delay, with nicely pulsating diatonic figures that have an appealingly advanced minimal quality.

Christian Wolff's "Another Possibility" (2004), specifically for electric guitar, is a kind of sequel to Morton Feldman's "The Possibility of a New Work for Electric Guitar" (1966). The latter had been performed several times by Wolff when somebody stole his guitar with the only extant copy of the work inside the case. So the work was forever lost, seemingly and tragically. (However a tape of a Wolff performance has been resurrected from the KFPA archives, so a critical edition is now in the works.) The Wolff piece has a resplendent high-modernist melodic-harmonic flourish and a consistent linear nicety to it. If it sometimes reminds me of some of Captain Beefheart's jagged-edged contrapuntal works for guitar, it is doubtless a case of synergy.

Anthony Porter's "Hair of the Dog that Bit You" (2011) was originally for amplified acoustic guitar and looper. Fiore seems to be using an electric for this performance. Four movements alternate between a sort of freedom and loop-based circulatory modes.  The freely articulated parts segue well with the Wolff work via their high-modernist expanded tonality but also have a jazzy quality with some advanced chording. The looped sections resonate somewhat with the Beglarian work, though this is a bit more involved in the way overlapped second lines remain more independent than directly interlocking, though there is plenty of forward moving rhythmic elements.

Larry Polansky's "Freehorn" (2004) uses an amplified resonator guitar whose frets have been redone to match Lou Harrison's just intonation specifications. A second part overdubbed for the slide electric guitar gives Fiore the ability to gradually detune-retune G-B-D-G harmonies, gradually working away from standard tuning and converging to various degrees with the just-intonated resonator. It is involved and fascinating to hear.

Fiore's performances are meticulous and poetic, outward reaching and foundational at the same time. The four works give us  a nicely contrasting and nicely executed gamut of new possibilities that are a pleasure to experience. Beautifully done!
Posted by Grego Applegate Edwards at 9:03 AM