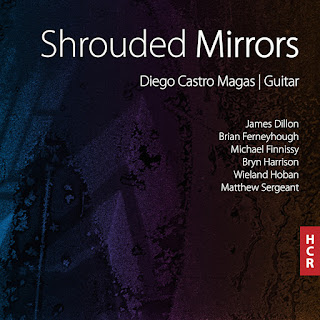 Today, an album of startling virtuosity and modern new music of great interest and complexity. Diego Castro Magas is a classical guitarist who internalizes the formidable demands of these compositions and produces performances that shine with the luster of brilliant architectonics and make very much alive some ravishing music.

The album is Shrouded Mirrors (Huddersfield Contemporary Records HCR10). On it six contemporary composers give us six fascinating high modern and/or postmodern works that reward with labyrinthian expressionism and fully idiomatic guitar passagework. These are the sort of things one would not trust to just any old classical guitarist. They require someone with great technical facility and a full understanding of the new music idiom.

Every work has something going for it, be it microtonalism/unusual tuning in Brian Ferneyhough's "Kurze Schatten II" (1983-89) or Wieland Hoban's "Knokler I" (2009), mesmeric repeating complexes with a kind of aural kaleidoscope feel as in Bryn Harrison's "M.C.E." (2010) , or complexes of jagged abstractions that extended what a guitar is usually called upon to do, as with Matthew Sergeant's "bet maryam" (2011), Michael Finnissy's "Nasiye" (1982, rev. 2002), and James Dillon's "Shrouded Mirrors" (1987).

It is music where both the performer and composer stand out as bringing the contemporary modern classical guitar to new levels of avant brilliance. A most impressive program. Anyone who revels in new music that expands the boundaries and enters fearlessly the frontiers will find this one exceptional. And even the novice will be mightily impressed, I would think, with the level of achievement. Bravo!