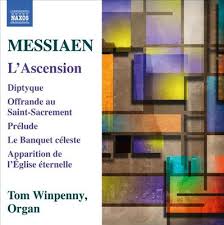 Olivier Messiaen, as the liners to today's CD helpfully remind us, enrolled in Marcel Dupre's organ class at the Paris Conservatoire in 1927, though before this he had never even touched a cathedral organ. By the late '20s-early '30s he was composing music for the organ with an astounding depth, maturity and a deeply mystical quality. In the end his organ music has become one of the highlights of 20th century music, a triumphant culmination of the symphonic and freely fantasiatic beauty of the French Organ School. The liners note his affinity with the Charles Tournemire of L'Orgue Mystique, and I heartily affirm that, having the good luck to grab a fine LP set of the work in the days of the now long defunct Music Heritage Society. There is affinity but then a further evolution of the style as Messiaen became a composer of great gifts.

So all of that can be readily heard and experienced in a new volume of early Messiaen organ works, L'Ascension (Naxos 8.573471). Tom Winpenny gives us a beautifully dramatic reading of the works in all their glory.

There is everything going for this latest Winpenny Messiaen release. Anyone who wants to better understand Messiaen's place as one of the greatest modernists of all will find this volume illuminating, giving you the beginnings of his special journey into his own mystically Catholic world and the exceptional ways he expressed that way of being. And as an example of the French School at large, the connexions are clear. But most of all this is very moving music, very well played.
Posted by Grego Applegate Edwards at 5:15 AM