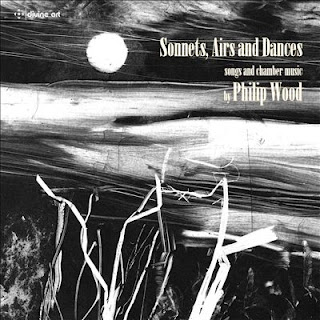 Philip Wood is a present-day representative of the "English School" of composers who looks backward in order to look ahead. The album at hand, Sonnets, Airs and Dances (Divine Art 25131), gives us a good deal of music that lies firmly and delightfully in the neo-classical camp, with a pronounced sort of late renaissance/baroque-meets-modern feel. You can hear the legacy of Britten, Vaughan-Williams, Walton and others of the past century, only Wood applies his own fertile inventive abilities to give us his own take on "the old in the new."

If I were doing Shakespeare and wanted someone to set the lyrics to the plays with fresh songs, Wood might just be my choice. He manages to capture the pastoral, the natural, the spring effusions favored by poets and songwriters in the earlier times, and you can hear Ophelia in there somehow, too.

The song cycles presented here by soprano Lesley-Jane Rogers, a capella and with recorder virtuoso John Turner, harpsichordist Harvey Davies and for part of them, cellist Heather Bills, have a re-inventive rustic charm and a haunting quality. "Sonnets, Airs and Dances," "Five Spring Songs," "Two Motets" all have a special betwixt-and-between feel with present-day elements mingling freely and inventively with early music sonic roots. If Henry Purcell came back from the dead somehow (an unlikely event) and entered my living room (even less likely), wanting to hear what modern music was up to, I might start with this as something he would feel affinity with, before shocking him with some more divergent sounds! I think he would be pleased with this album. Though he would no doubt find it went ways unfamiliar to him.

"Partita for Recorder and Cello" brings John Turner to the fore within a backdrop of  nicely figured cello from Jonathan Price. On from there counter-tenor James Bowman stirringly brings us more of the vocal end of Wood's music with a three-movement "Aria, Recititive and Rondo" for voice and Jonathan Price again on the cello.

The end of the program caps everything off with Turner and his recorder capturing the final moments with the solo "A Lonsdale Dance" and then for a finale the Manchester Camerata chamber ensemble providing the neo-classical backdrop for the delightful "Concertino for Recorder and String Quartet," which takes us rather closer to the modern sensibilities while still retaining a nod to the past.

This music is balm for musical Anglophiles. Wood is a new voice who carries on with music that captures the English countryside as the English composers are fond of capturing it--regenerative, idyllic, like Hardy's Wessex, only without his ultimately tragic outlook. I am glad to have this one. It gives us a very nicely expressive series of moments. Wood belongs in your "modern English neo" stacks for sure as a vibrant new member with real talent and the strong ability to avoid cliche and remain fresh. Performances are first-rate and the music transcends some of our weary, dreary present!

Recommended!
Posted by Grego Applegate Edwards at 5:20 AM