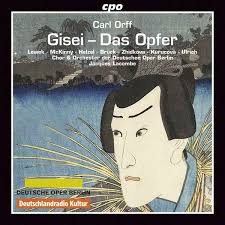 Carl Orff (1895-1982) made a sharp distinction between the works he composed before and after his celebrated "Carmina Burana." There is something to be said for that, though based on today's recording he went too far when he condemned the early works in a blanket fashion.

Gesei (CPO 777 819-2), his first opera, enjoys a well put-together performance in the hands of Jacques Lacombe, soloists and the Chor und Orchester der Deutschen Oper Berlin. It is based on the Japanese 16th century Bunraku Kabuki play "Mirror of the Art of Caligraphy Transmitted by Chancellor Sugawara," more specifically the principal act "Terakoya" ("The Village School"), written by Takeda Izumo and three colleagues. "Gesei" ("The Sacrifice") is based on Karl Florenz's translation. The plot line is involved and for this review I will leave that for those who ultimately wish to experience the music.

Orff's disdain for his earlier works have not encouraged their revival over the years. Yet "Gesei" has a great deal to offer in the quality of its music, its nicely wrought orchestration, its dramatic arc. Admittedly this is Orff in a more eclectic period. One is most certainly reminded of Debussy's Pelléas et Mélisande for its orchestral mystery, and traces of Wagner perhaps.

Soprano Kathryn Lewek in the principal role of Kwan Sushai is convincing as is the cast in general. The orchestra and chorus give us a near impeccable reading thanks to Jacques Lacombe's interpretive acumen.

The music is memorable if not in any way as original as Orff's later works. It is a revelation for those who appreciate his music, myself included, and stands on its own as a worthy experience. It does not show immaturity but rather a good deal of brilliant craftsmanship. I would recommend it, especially if you are disposed toward the composer.