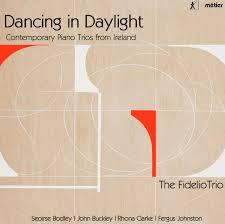 Ireland's most exciting news lately is the existence of the Fidelio Trio, a piano trio of great finesse and ability. They just completed a three-year residency at St. Patrick's College, Drumcondra, which is a college of Dublin City University. While there they performed four modern trios which they commissioned. We get to hear them play the works on the recent album Dancing in Daylight (Metier 28556).

Adi Tal, cello, Darragh Morgan, violin, and Mary Dullea, piano, show us an expressive unity and depth that matches perfectly the considerable and sometimes wonderfully subtle musical demands made by the composers involved. John Buckley's "Piano Trio" (2013), Fergus Johnston's "Piano Trio" (2011), Rhona Clarke's "Piano Trio No. 2" (2001, rev. 2015) and Seoirse Bodley's "Piano Trio 'Dancing in Daylight'" (2014) are works as memorable as they are thoroughly of our times, modern-postmodern, tonal, dramatic and evocative, alive with rhythmic vitality such that one could well imagine dancing to parts of them.

The Fidelio Trio have a remarkably pliable ensemble discipline that seems made to order for these works. Each of the three artists have beautiful tone, touch and articulatory clarity, and for each work they function with great subtlety in phrasing and making wholly present the many varied twists and turns with exceptionally musical style and grace.

Each of the four works has a gem-like brilliance that shines forth, neither ignoring the piano trio legacy of past landmarks nor paying undue attention to them, but rather plotting a distinctly personal path that is not unlyrical most times but also briskly contemporary. There is an Irish quality to all of this, as certainly one might hope, something in the capturing the past and bringing it into the very open present-day of possibilities, something in its beautifully singing qualities. This no more so than in the title work by Bodley, but it is true in general of the four works. I am keen too on the atmospheric sort of haunted quality of Buckely's Trio, which to me expresses a mood not quite of melancholy but mysteriously contemplative. But then Johnston and Clarke give us music of a high order as well.

The Irish part of me rejoices in the music, the other mutt-like aspects are impressed and no less enamored. It is a wonderful recital by a trio that breathes together as one, playing music that has both charm and musical significance. It is an exemplary disk for those wishing to explore the ultra-contemporary chamber music scene, where modernism has gone and what it can embrace, which is considerable in the hands of this talented trio and their composer brethren-sisteren.