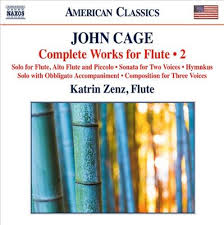 Flautist Katrin Zenz continues her excellent explorations of John Cage in the Complete Works for Flute 2 (Naxos 8.559774). In this volume she gives us lesser-known works from the early, middle and later periods, many in first recordings. For my review article on the first volume, type "Cage" into the index box above.

The "Solo for Flute, Alto Flute and Piccolo" (1957-8) comes out of pages 133-144 of the "Concert for Piano and Orchestra," which does not have a score, but pages that can be played together or by separate instrument(s), in effect making possible many works. This realization gives us multiple flute soundings of melodic material typical of the middle period, performed nicely.

Then follows a series of earlier works never before recorded: "Solo with Obbligato Accompaniment of Two Voices in Canon, and Six Short Inventions on the Subject of the Solo" (1933-34) in a version for alto flute, piano and vibraphone arranged by Anargyros Deniosos. It has an expanded tonality, early serialist feel to it but an early Cagean earthiness, as do the following "Composition for Three Voices" (1934) in a Zenz arranged version for flute, alto flute and bass flute made possible by multi-tracking; and the "Sonata for Two Voices" (1933) arranged once again by Zenz for flute and bass flute. These are nicely modern works that happily are in first recordings in the present form.

Finally we have a 30-minute major later period work "Hymnkus" (1986), in a Deniosos-arranged version for flute, two pianos and two vibraphones. The work makes hypnotic use of a limited number of notes at any given time (all possibilities chromatically from c to d1) in seemingly an infinitely variable sequence of rhythmic entrances, with at first the sequences disjointed and sporadic, then more insistent. The music is divided into 17-tone event clusters that vary in speed and require each musician to move from one event to the next at a different rate according to the part involved, so that the overlapping universes of soundings becomes very involved and fascinating to hear. This is a more minimalist sort of Cage than we are used to experiencing. It is a first recording as well and a very illuminating one at that.

So in the end we get a good deal of unheard sonances from the early and later works and a unique, previously unheard realization of part of a well-known classic middle phase work. Katrin's flute is wonderfully played and she triumphs over some music that in lesser hands might become tedious. Compliments must also be given to her fellow ensemble mates--Tobias Liebezeit and Maxim Mankovski on vibraphones,  and Chara Iacovidou and Ludovic Frochot on pianos.

In all this is a most provocative but also very pleasurable volume of early and later high modernist Cage. Those who would like to know more about the method Cage uses to assemble each work are referred to the detailed liner notes. Ultimately the music SOUNDS well, very well, which in the end should be our main criterion for listening. That this is so is of course a testament to Cage's brilliance but also to the superlative artistry of Ms. Zenz, her thorough research that has unearthed worthy treasures, and to the artistry of her chamber-mates.

For the flute afficionado and new music/Cage enthusiast this one is invaluable and invigorating. It may easily appeal to the non-specializing listener who seeks something adventurous, too. Molto bravo!
Posted by Grego Applegate Edwards at 5:38 AM