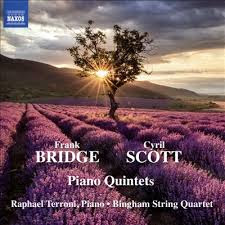 Today we get the chance to consider two Piano Quintets (Naxos 8.571355) from two English composers who in the first decades of the 20th century were considered some of the bright lights on the English scene. Their music and reputations suffered some eclipse in the later years. Now we can hear their music with "fresh ears" and worry less about how "progressive" they may or may not have been compared to others on the contemporary landscape at the time, and evaluate the music on its own terms.

Frank Bridge (1879-1941) gives us a seriously well-crafted "Piano Quintet in D minor, H49a" (1904/1912), a rhapsodic, romantic work with a good deal of sentiment, a bravura piano part that bears comparison with a Rachmaninov or a Liszt and good thematic wealth that is developed skillfully. There are touches of his times to be heard, but no evidence that he was any sort of obvious innovator. He is not precisely Elgar-like here, and not exceptionally tied with any English school, but a thoroughly Europeanized late romantic who had mastered his craft.

Cyril Scott (1879-1970), on the other hand, has in his "Piano Quintet No. 1" (1911?) a pronounced impressionistic component that goes along at times with a fair amount of romantic rhapsodic demeanor and at times a striking melodic touch (listen especially to the third, adagio movement). The harmonic palette is more colorful and modernistic, there is a more chromatic aspect to his music, and the expressive means at his disposal have at times broken free from structural convention and allowed to freely follow modal ideas without a lot of attention to modulation and development, more in a fantasia-like manner than not.

I find the Scott work the more interesting of the two, though it is great to be able to hear both works and fill in the blanks in the Anglo early modern scene. The performances are very much first rate and perhaps more noticeable in the Scott work because of its greater novelty of means.

Anyone interested in the English school of the 20th century will revel at the chance to hear good performances of these works. The music uplifts and gives you plenty to contemplate as well. Perhaps near essential for the Scott, very illuminating for the Bridge. Give it your ears.

Posted by Grego Applegate Edwards at 4:50 AM