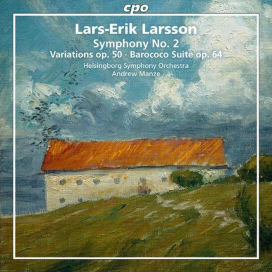 Swedish modernist Lars-Erik Larsson (1908-1986), I'll admit, is not a composer I have become very familiar with until now and the CD Orchestral Works Vol. 2 (CPO 777 672-2). It is in SACD Surround/Standard Stereo CD format so provides compatibility with both systems and sounds very good regardless.

The Helsingborg Symphony Orchestra under Andrew Manze give us nicely contoured, enthusiastic readings of the works contained in this volume, which are the "Symphony No. 2, op. 17," the "Variations for Orchestra, op. 50," and the "Barococo, Suite for Orchestra, op. 64." Larsson sounds nothing like fellow-Swede Allan Pettersson, nor would there be any reason to expect that he would. And he is less radically modern than Blomdahl.

His Symphony (1928) has a gigantic thematic sweep a la Bruckner, perhaps, yet sounds more contemporary and original, freely tonal with a step beyond Sibelius and Nelsen I suppose one could say. It is an engaging work.

The "Variations" (1962) show a more modern Larsson, effected by Hindemith and Schoenberg's 12-tone method, somewhat neo-classical in form and restlessly edgy in an advanced tonality. The orchestration is exceptionally interesting and more Nordic than Germanic, I suppose one could say.

The "Barococo Suite" brings us up to 1973 with a renewed neo-classical stance and a sort of synthesis of the earlier ventures in tonality tempered by a heightened sectional treatment of orchestral forces. It has a rather delightful zest to it that stands on its own with a great deal of charm, a post-Stravinskian modern tinge and thematic abundance that wears well with repeated listens.

So really we have three very different periods/styles in this volume, which all together give us a pleasing and vivid picture of the composer through time. It is music one grows into readily and ultimately brings us some worthwhile Larsson, well performed.

I found it bracing, contentful and rather masterful on the whole. Those like me who are not intimate with his music will find much good to discover. Swedish modern specialists will be no doubt equally happy with this one. A fine disk it is.