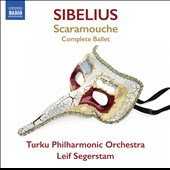 From the Turku Philharmonic and Leif Segerstam's ongoing recorded series of lesser-known Sibelius orchestral music comes the latest, Scaramouche, Complete Ballet (Naxos 8.573511). It was completed in 1913, despite Sibelius' misgivings on the pantomime and its addition of dialog. He nevertheless devoted considerable attention and care to the score. It had to wait until 1922 for a first performance, which was rightly hailed for the music, less so for the ballet scenario.

And so lucky for us we get to hear the whole of it by Segerstam and company, two acts and some 71 minutes of ravishing music, with solo parts for Bendik Goldstein on viola and Roi Ruottinen on cello. It is, so the liners tell us, Sibelius' only continuous dramatic score, other than his opera.

The music goes from idyllic to more dramatic as it follows the story of the spellbinding musical charms of the dwarf and his ultimately evil intent.

It is vintage Sibelius, glowing with his lyrical abundance, his modern Finnish impressionistic-post-romantic brilliance in parallel to his Oceanides (1914) and Fifth Symphony (1915), perhaps not quite the masterpiece of the other two, but filled with that special Sibelius orchestral dazzle and thematically alive.

Leif Segerstam and the Turku Philharmonic turn in the sort of spacious, idiomatically vibrant performance we have come to expect from this series.

All who love Sibelius will find Scaramouche a beautiful addition to their library. Those who don't know him well might better start with the "Violin Concerto" or the Symphonies 4-7, but this one is a beautiful musical journey I'd imagine even for the uninitiated.