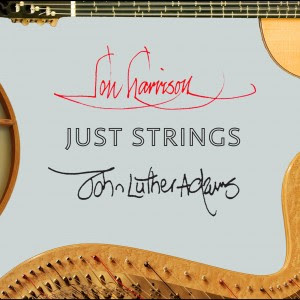 The combination of the ensemble Just Strings and the music of American iconoclasts Lou Harrison and John Luther Adams (Microfest MF7) seems both natural and just about inevitable. The combination of Alison Bjorkedal on harps, John Schneider on guitars and T.J. Troy on percussion is substantial and virtually perfectly conceived. The music often enough calls for the use of "just intonation," non-tempered tunings. The ensemble embraces this, as their name "Just Strings" implies. And they work their way through the pieces with a profound sympathy for the music.

The Harrison and Adams works have a sort of new world, folk-like quality. Indeed the mature Harrison was a real pioneer in this realm and Adams gives us music here from a period (1995) where he was working in parallel modes.

In all we are treated to six works, five in first recordings. For two of the Harrison pieces ("Harp Suite #2" and "In Honor of the Divine Mr. Handel") they are joined by the HMC American Gamelan for an increased and nicely "exotic" sonic stage.

Harrison's works cross a broad span of time, from 1951 to 1992. They are wonderful examples of his diatonic, archaic world miniatures and his way with the harp. Both Harp Suites provide a wealth of Harrison, early to late. His short "Lyric Phrases" (1972) and the work honoring Handel (1991) give us further insight into his special sonances.

Just Strings give us definitive readings of the music, with considerable spirit. The HMC American Gamelan thrive on this music, too.

It is a volume that wins the day by a lyrical panache and an authentic straightforwardness that characterize Harrison at his best, but then show us an Adams who communicates equally well in this realm. It is a beauty of an album on all fronts.

Lovers of world-archaic new music modernism will find this highly worthy. Virtually anyone should find fascination here. Get the album!