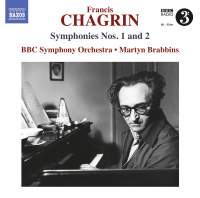 We contemplate today yet another modern composer you likely have never heard of, one Francis Chagrin (1905-72), born in Romania yet spending the bulk of his life in England, prolific composer of film music and nearly completely forgotten for his serious, ambitious works.

To give us an excellent look at the unknown symphonic composer, we have thankfully the BBC Symphony Orchestra under Martyn Brabbins and their presentation of Chagrin's Symphonies Nos. 1 and 2 (Naxos 8.571371).

He was born of well-to-do Jewish parents in Bucharest, as Alexander Paucher. He showed a pronounced aptitude for music, secretly put himself through a conservatory program in Zurich while ostensibly studying for an engineering degree there since his parents expected him to join the family business. He managed to contract a failed marriage and become disowned by his family for his insistence on a musical career, and fled to Paris  in 1928. There he changed his name, studied with Paul Dukas and Nadia Boulanger at the Ecole Normale and began writing music for film. With the looming war ahead and its insecurities (especially for a Jew) he then migrated to England, where he made his home from 1936 onward.

He was able to thrive there through a successful and abundant production of film scores, creating over 200 of them over the rest of his life. But it is with his concert music that his talent comes through most readily.

The two symphonies show us an original musical voice, dramatically expressive and very modern, a more dissonant and extroverted figure than, say, Hindemith, but sharing with him a kind of neo-classical penchant for unfolding, logical linearity.

The world premiere recorded performances show us nicely the dramatic arcs of his music, well orchestrated and very dynamic. Martyn Brabbins and the BBC Philharmonic give us enthusiastic readings that bring out the salient qualities of the symphonies. This Francis Chagrin, had he been able to devote his full attention to concert works, might have become one of the brighter lights of the modernist century. These works show a fully formed original master, writing moving and even exciting music.

I recommend the music to you highly, all you with an appreciation of the modern classical era, and all who are not afraid to open up to the lesser-known figures in the history of our times. Chagrin is brilliant, I would say! Or at least he shows that in the two symphonies.