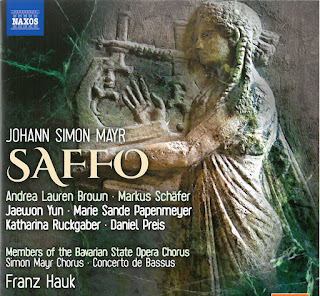 One thing about living through the modern world is experiencing the revival or eclipse of various composers. You may find a composer that has been de rigueur for many years is suddenly on the outs. And by the same token somebody completely neglected for 100 years or more might be coming into currency. The case of Johann Simon Mayr (1763-1845) shows sign of the latter, judging by the Naxos releases, anyway.

He wrote 70 operas between 1794 and 1824 (!) and some 600 sacred works. He was well-respected by his peers. Yet today he is all-but-forgotten. Franz Hauk with members of the Bavarian State Opera Chorus, the Simon Mayr Chorus, Concerto de Bassus and soloists give us a nicely burnished performance of Mayr's first opera, Saffo (1794) (Naxos 8.660367-68 2-CDs).

Mayr lived and worked in Venice, was born in Bavaria, and subsequently was a champion of Haydn, Mozart and Beethoven. His operas (or at least this one, as my ears affirm) show their influence but in combination with the Italian style (Donizetti was one of his star pupils).

Saffo has a rather irresistible charm about it in the hands of Franz Hauk and company. The soloists, choruses and orchestra give us a very attractive performance. You can hear the Haydn-Mozart-Beethoven influence in the finely crafted orchestral parts; there is a real tunefulness and exuberance in the arias, ensembles and chorus parts, certainly in a lively Italian manner that reminds of Donizetti, Bel Canto, and Rossini in the most positive ways.

The plot is gone over in the liners and I will leave you to that if you find this interesting. From a musical perspective there is nothing lacking. Vienna and Venice commingle in ways that delight. Why is this opera not performed much these days, or for that matter the 69 others, which I have not heard? The opera scene as we know tends to fixate on certain works and not others, though Saffo at least musically has the sort of memorability that would recommend it. Fate and calcification are no doubt the explanations most relevant.

We do have this marvelous recording, however. It is everything one would hope for in the verve and musical accomplishments of the company with Hauk at the helm. I find it quite moving! Opera buffs and their friends should undoubtedly feel the same way if they give the music a chance. Very recommended!