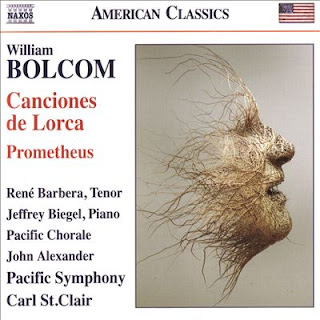 William Bolcolm (b.1938) is one of those composers who throughout his career has touched on a variety of style complexes and somehow has managed to make the music very much his own. He is one of the most compelling of living composers, in my opinion. We catch up with him with two memorable works from 2006 and 2009: Canciones de Lorca, Prometheus (Naxos 8.559788). Tenor Rene Barbera and the Pacific Symphony under Carl St. Clair do a wonderful job on the Lorca work; John Alexander and the Pacific Chorale with Jeffrey Biegel on piano combine with the orchestra to give us a very nice reading of "Promethus."

These are prime works of Bolcom in his later phase, where tonality and modernist touches work well together, consonance and the spice of dissonance accommodate one another in a fertilly creative zone that is all Bolcolm's.

Canciones de Lorca sets several poems of Federico Garcia Lorca to music. The work takes on the various moods of the poetry and Bolcolm shows genuine brilliance combining Spanish traditional strains with contemporary Bolcomism. Barbera is dramatic and expressive in his role, originally fashioned for Placido Domingo. Those are big shoes to fill but Barbera holds his own. The orchestral parts breathe in ingenious ways.

"Prometheus" is somewhat more thoroughly modern and expressionist. Prometheus in the modern-day incarnation is chained to a rock and gnawed away by our technological dependence, something we all experience today. It is music of moving gravitas, describing in aural terms the often autonomous demands made on us by our hundreds of years of "progress." The music is exceedingly well crafted and luminous in its dark brooding, though that may sound contradictory. Tonality and dissonance stand side-by-side and work together for a result that brings the whole convincingly together and creates a complex set of moods well suited to the subject matter.

Both works serve to remind us that Bolcolm remains vital. The disk shimmers with the sounds of a fully matured master of his vocal and orchestral resources, a sound poet who has grown and made of his music a most distinct amalgam that combines what is "in the air" today with an inspired immediacy. Brilliant!