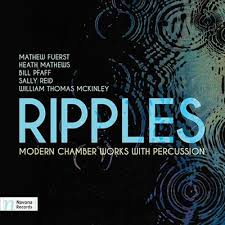 The spirit of adventure has in no way disappeared from the new music scene. A great example is in the anthology Ripples, Modern Chamber Works with Percussion (Navona 6033). There are five composers and works represented, each with a prominent, often virtuoso part for a percussionist.

"Broken Cycle" by Mathew Fuerst is performed by ReadyGo--Stacey Jones-Garrison (percussion) and Brad Blackham (piano). Marimba and piano begin the work with rapid post-minimalist motored patterns and then quickly segue into a fantastic set of asymmetrical figures for piano and temple block-toms, then move forward once more into vibes-piano figurations and so on.  A bracing beginning!

Heath Mathews gives us "Digressions" for Duo Zeno--Preston Duncan on sax and Scotty Horey on percussion. This work features lively interplay between marimba and saxophones in a kind of variations-on-variations mode.

Bill Pfaff's "Lichen" is more contemplative, giving a dialog to marimba and piano that is reflective, then more dramatically assertive, but always nicely turned. Sally Reid's "Three Trifles" pits alto sax and tom toms, timpani, etc. in three short movements that begin with an exotic, world flavor, then contrast with passages quietly contemplative, and finally ending with the moving and brisk, with a complicated melodic role for drums/percussion. Matt Sharrock is musical and deftly accomplished as the percussionist for these two works.

William Thomas McKinley's "A Different Drummer" was commissioned by Robert Black and the New York New Music Ensemble as a virtuoso vehicle for percussionist Daniel Druckman.  At 25 minutes this is the longest and also the more involved work of all with a long-form chamber ensemble confluence that brings to the forefront Druckman's snare drumming, marimba, vibes, xylophone, melodically malleted toms, etc.,  in an ever-shifting confluence of sound color and instrumental juxtapositions. This is music with a classical-modern-and-beyond feel, quite nicely done.

All of this involves music of contrasts, like an American Indian sweathouse, where one stays in an overheated building for a time, then plunges into an icy cold stream just outside.  It is an album of musical substance, a sense of adventure and compositional singularity. Anyone who loves percussion played well will be attracted, as well as the general modern post-modern chamber aficionado.

Good show!
Posted by Grego Applegate Edwards at 5:35 AM