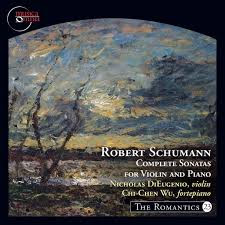 The three violin-piano sonatas of Robert Schumann were not often heard in my early lifetime. Hence I never got to know them. The first sonata has been performed more frequently than the rest, though still less than Schumann's other chamber works as a whole. The second has been given even less attention and the third was not published until 1956--and even then did not get much coverage. All that seems to be changing.

The single CD Complete Sonatas for Violin and Piano (Musica Omnia 0610) as played by Nicholas DiEugenio (violin) and Chi-Chen Wu (fortepiano) is a product of the renewed interest but also a singularly effective set of performances that help us make ultimate sense of the music. As the liner notes explain, part of the problem has been Schumann's tendency in these works to restrict the range of the violin mostly to the two middle strings of the instrument, with little of the high-note brilliance one expected from the period. This in itself may have discouraged virtuoso violinists from performing them. That and the piano part's tendency to double the violin line or encase it in the piano passagework has caused some problems when played with the much louder modern piano. The balance in those cases was often enough skewed toward the latter, changing the character of the works as Schumann originally envisioned them.

Chi-Chen Wu for this recording plays a beautifully sonorous 6 1/2 octave pianoforte constructed anew by R. J. Regier according to the specs of a Viennese instrument of Schumann's time. The piano in those days produced a special tone that was not nearly as forte as the modern instrument. As a result the balance between violin and piano is much more naturally in synch here. The transparency of tone of the earlier piano tends less to overpower the violin part but instead allows the violin equal partnership in the dialog with both parts clearly distinguished and readily grasped.

All were written with a few years of each other. The first in 1851, the second in 1851, and the third in 1853, the last initially as a group composition by Dietrich, Brahms and Schumann in honor of the famous violinist Joachim. Later Schumann replaced the several movements by the other composers with ones of his own.

The three presented by DiEugenio and Wu on this recording, with the period pianoforte, are totally convincing. Indeed the less percussive and sweetly fragile tones of the earlier instrument does much to engage the listener in the violin-piano interplay as Schumann conceived of it. And the idea that this music, as was once asserted, was the beginning of a decline of the composer's powers marked by his 1854 suicide attempt and oncoming mental illness does not hold weight.

The music is as typically Schumann-esque as any of his better known chamber works. The single-minded restriction of the violin's range gives the music a darker cast, surely, but when played in conjunction with a period piano rings out with a subtlety and acoustic logic that may be missing in a standard version today. DiEugenio and Wu give the music plenty of the passion called for, but also a gentleness and sensitivity to the introspective aspects of the scores that help us hear contrasts and formal balances that a more bombastic, bravura version might miss.

In the end we get interpretations that glow, that resurrect Schumann's intent, that thrive in the rich thematic material and show us that the three sonatas as a whole are fully deserving our attention and reward us with some very fine music. Schumann fans will revel in this release. But even those with an encompassing need for something not overly performed will find these works a logical progression between Beethoven and Schubert and the later ways of Brahms. It is music that delights. Very recommended.