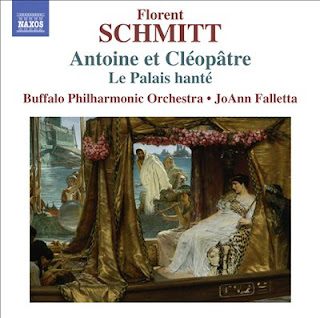 Florent Schmitt (1870-1958) was most active as composer in the early decades of the 20th century in France. He studied with Massenet and Faure. He was a Wagner enthusiast but also friends with Ravel and Satie. His music has been neglected for the most part in our era. But a recent release by the Buffalo Philharmonic under Jo Ann Falletta gives us a new look at several of his orchestral works, Antoine et Cleopatre, Le Palais hante (Naxos 8.573521).

Each deals with iconic English-language literary lights. A work centered around Shakespeare's play "Anthony and Cleopatra" (1920) served as incidental music for the Gide-translated version as performed at the Paris Opera (1920). Schmitt arranged the music into two suites for concert performance and such is the form we hear it in on the present recording.

Both are well wrought examples of what the liner notes on the album refer to as his "eclectic" approach. Indeed, you can hear echoes of Wagner and late romantics but also impressionist modernism. Both rather seamlessly intermingle and get moulded into an original cast of sorts by Schmitt. Every once in a while the music hits me as being somewhat Scriabin-esque in its harmonic restlessness as well.

These are the kinds of scores Jo Ann Falletta and the Buffalo Philharmonic do so well with--and so we get a detailed and impassioned reading of the music that does full justice to the composer. Schmitt shows orchestrational brilliance that Falletta takes care to bring to life. I've heard some of Schmitt's chamber music before but I do not believe that his orchestral music has previously graced my ears. The disk gives us an hour of lively music and a good idea of Schmitt in this conext. He may have served as a sort of way station on the road to French modern singularity, but the works here give you much to appreciate in that guise. Recommended.