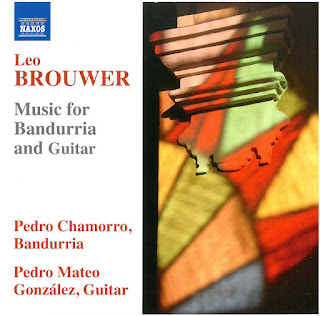 Leo Brouwer (b.1939) arguably has inherited the mantle as the foremost Latin-American composer for the guitar some time ago and has yet to relinquish it. But he also has written some fine music for the Bandurria, a Spanish cousin of the Mandolin that has remained popular in Latin America from the time of the arrival of the Spanish to to the present. Music for Bandurria and Guitar (Naxos 8.573363) gives us two duets for both instruments, plus one for solo bandurria and two for solo guitar. Both Pedro Chamorro on bandurria and Pedro Mateo Gonzalez on guitar are excellent exponents of their respective instruments and play the pieces with skill, imagination and charm.

The works themselves have varying degrees of Cuban folk elements, melodic tradition and/or modern leanings, all with characteristic Brouweresque flourishes.

The "Sonata para Bandurria" (2011) (a first recording) is a full-scale virtuoso showpiece that was written expressly for Chamorro and has three incisive movements. The guitar complement can be heard in the "Sonata del Caminante" (2007) which has some finely wrought, intricate passage work and makes equal virtuoso demands that Gonzalez handles with real artistry. It is idiomatically Latin-American in technique (though purposefully more intense that lyrical) but also has a modern advanced quality in a kind of perfect balance. It is a tribute to guitarist Odair Assad, for whom it was written, while also depicting the beautiful panoramas of Brazil.

"Variaciones un tema de Victor Jara" (2007) pays tribute to the Chilean singer, songwriter and martyr with four movements for guitar. The music consists of variations on one of Jara's songs, "Lo unico que tengo (The Only Thing I Have)." The music is alternately warmly evocative and searchingly modern.

In the end this is a rather delightful volume of Brouwer at his best. The bandurria has a special sound that provides a refreshing change in sonance whether in solo context or in tandem with classical guitar. The guitar pieces are equally attractive. Both players are well prepared and fully accomplished, giving these works some pretty glorious interpretations. It may not set the world on fire, for that there are other Brouwer volumes, but it gives you captivating music throughout. Very recommended.