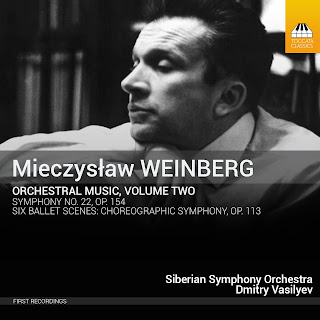 The reputation of composer Mieczyslaw Weinberg (1919-96) has soared in the past decade or so. CD releases have multiplied rapidly, unearthing gems virtually all of us had no idea about. It continues. Orchestral Music, Volume Two (Toccata Classics 0313), with Dmitry Vasilyev conducting the Siberian Symphony Orchestra, gives us yet more revelatory music in first recordings, "Six Ballet Scenes, Choreographic Symphony, Op. 113" and his very last "Symphony No. 22, Op. 154," which was left in full piano score on his death and has been orchestrated convincingly by Kirill Umansky.

The "Ballet Scenes" Symphony has the lively scope of contrasts one can readily imagine as a ballet, which it was initially, though never performed. The White Chrysanthemum Weinberg completed in 1958, but for whatever reason it was never to be. He later returned to the music, adding interludes of improvisatory fantasia, conceiving it anew as a purely concert work. There is no evidence that it was performed during his lifetime. This recording apparently constitutes a first performance. It is worthy Weinberg without doubt, filled with vitality and grit.

The Symphony No. 22 was musically complete in piano reduction at the time of Weinberg's death in 1996, but the orchestration had to be taken on by Umansky for presentation in the 2003 "Moscow Festival." The work has a rather somber cast fitting for the composer's farewell gesture. It is deeply profound in its reflectively sober summing up with undiminished inventive thematics. Exemplary last-period Weinberg it certainly is, with the orchestration sounding true to the musical thematics and Weinberg's orchestral palette in later years.

The Siberian Symphony Orchestra under Dmitry Vasilyev brings a luminous sonarity and a careful idiomatic treatment of the scores so that the performances give us all we might hope for in first recordings. The music is revelatory, once again, of the brilliance of this once underappreciated composer. His affinity with the sort of commanding, dramatically edgy approach of Shostakovich can be heard on the two works, yet there is an unwavering originality, too. Weinberg was and is an important figure on the modern, later 20th century Russian scene, and this music confirms that with genuine symphonic artistry and excellence.