Tim Brady, The How and the Why of Memory 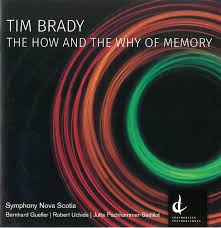 Back to some current-day modern orchestral music, today from Tim Brady. He is a Montreal-based composer and he gives us three recent, substantial works on the album The How and the Why of Memory (Centrediscs 21515).

Symphony Nova Scotia under Bernhard Gueller bring us enthusiastic, detailed readings of the works. They center around Brady's Symphony No. 4, "The How and the Why of Memory" (2010-13) which is a rhythmically charged, bold and expressive modern work dealing with, in the composer's words, "how we listen to, imagine and especially how we remember music, trying to capture the flow of time, exploring issues of pattern, continuity and contrast."

The three movements (slow-fast-medium) run together continuously and leave us with an expanded tonality of finely orchestrated motorist constellations of horizontally oriented kinetic, insistent structures-in-motion. The music is ultimately modern in the most contemporary sense, well-wrought and highly charged.

Surrounding this pivotal work are two concertos. Opening the program is the "Requiem 21.5 - Violin Concerto" (2010-12), which reminds at times of the Berg Concerto for its impassioned anguish and thoroughgoingly ravishing violin part, played convincingly and artfully by Robert Uchida.

The music springs out of a passage from Varese's solo flute work "Density 21.5" and something from Mozart's "Requiem" in commemoration of the 28-year life of Lawrence Beauregard, the composer's friend from high school who played flute, cut down by cancer in his prime. The music has an understandably elegiac tone, with a movingly expressive fullness and regretful passion to it.

The program concludes with the "Viola Concerto" (2012-13). Julia Puchhammer-Sedillot does the honors impressively for the solo part. There is once again a highly expressive passion to be heard in this work, less mournful but showing again the restless motor rhythm excitement which is one of Brady's hallmark signature traits, working its magic with brilliance.

So that in essence is the music to be heard in this very engaging and involved program. Brady has his own way, embracing modernist tradition while finding his singular voice authoritatively and imaginatively, ultimately fashioning it all in a way that is very contemporary. This is a composer who has mastered for himself the nuances of orchestral possibilities, plumbed his own expressively vibrant imagination to bring us three masterful works that have all the makings of music for the future standard repertoire.

The How and Why of Memory gives us an excellent listen to a modern-contemporary composer of genuine stature. The performances are inspired and the music, indeed, lingers on in the memory as something to return to often. Very recommended.

Email ThisBlogThis!Share to TwitterShare to FacebookShare to Pinterest
Labels: contemporary-modern 21st century orchestral from canada, tim brady the how and the why of memory symphony nova scotia gapplegate classical-modern review