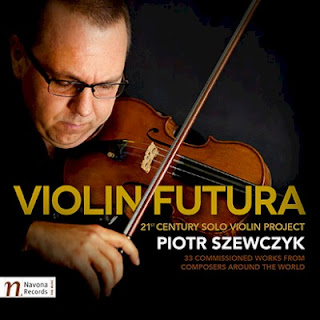 As if to bring home the idea that the unaccompanied solo violin is very much a part of the contemporary music situation, violinist-composer Piotr Szewczyk gives us the album Violin Futura: 21st Century Violin Project (Navona 6028 2-CDs). The set brings to our ears 33 short works, includng several by the artist along with Mason Bates, Patrick Castillo, Carson P. Cooman, Sydney Hodkinson, and many others. All were written between 2006 and 2010. The composers were born between 1934 and 1983, so a spectrum of generations and biological ages are covered. The composers hail from many lands, from the United States to China, from Mexico to Germany.

Piotr himself was born in Poland. He resides in the US, where he makes his home-base and often performs. He is a violinist of impeccable technique and expressive wealth.

The works nearly all have programmatic features and run the gamut of contemporary violin techniques and compositional approaches. None would be mistaken for a work by Bach or Paganini. So this is modern music in the wide sense of the term.

Given the large number of miniatures involved, Szewczyk sees the sequencing as a kind of meta-composing in itself. In concert he will play 16 through without interruption and varies the order each time. We as listeners perforce hear the music in wholes as well, which is not to slight the merits of any of the works individually, but rather to experience the unity-in-diversity that the entirety represents. There tends to be, as the composer notes in the liners, an aesthetic eclecticism at play, a commonality of pan-stylism that is oftimes a hallmark of our current century. But within the idiomatically violin-specific totality the project represents we nonetheless get much variety of conception and attack, ultimately very personal expressions within a general "post-" universe.

Maestro Szewczyk brings to us a finely virtuoso capability and his musical acuman makes of the great mass of music a singular totality of what the violin can be today. All of the works bring together a kind of state-of-the-art of where the solo violin situates itself in our times. It is music to engage, to nudge us forward into the present-future.

It is a beautiful listen, best heard no doubt in single CD sittings but also appreciated more and more as one listens repeatedly.

A wonderful recital of some very significant music! I strongly recommend it to you.