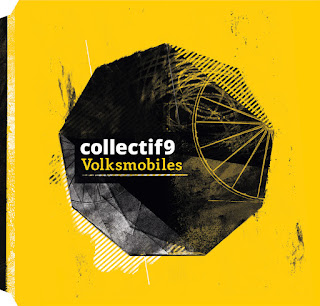 With the declining sales of classical CDs the past few years, there is a certain concern among the industry and artist base out there that "something must be done," that the music needs to appeal to new ears, that new ways must be found to engage people in the genre. I agree that new ideas might help. It is as true of classical as it is of "serious" jazz and perhaps of esoteric rock as well. So what is to be done?

One answer is in the deliberately entertaining ensemble collectif9 and their album Volksmobiles (self released).

The ensemble is a small chamber orchestra from Canada, a string nine-tet if you will. It has been attracting traditional and non-traditional audiences since its debut in 2011. This album is their first.

It is a lively gathering of mostly short folk-based works that work exceedingly well together.

The centerpiece is a three-part work commissioned by the ensemble, the title work "Volksmobiles" by Geof Holbrook and it shares with virtually the entire program a take on folksiness that is not afraid in include modern elements here and there.

Brahms' "Rondo alla zingarese" leads off the program as arranged by Thibault Bertin-Maghit, who is the double-bassist in the group. It has that infectious quality of the light classics that served as the music for various cartoons I saw as a kid. Those did get my interest and I guess the theory is that such music can still appeal to a broad base. I do not doubt it and the performance is very lively.

This is followed ingeniously by a Bertin-Maghit arrangement of a high-modernist folk work by Schnittke, "Sonata, Allegretto" (taken from his first violin sonata) and the juxtaposition gives us the modern equivalent of the Brahms in an almost uncanny manner, making it easy for listeners to enter "more difficult territory" without much effort, seemingly. It manages to demonstrate that the modern work shares with the Brahms a reworking of folk dance and so will I suspect connect the two different works in even untutored minds.

"Volksmobiles" follows and gives listeners a change of pace with some delightful post-modern accessibility that does not stint on musical content.

In the end the audience in a relatively short amount of time gets exposed to romantic-to-modern-to postmodern classical music with a unifying folk element, played with great brio and vitality. It is substantial music that kept my interest but I believe would also appeal as a sort of introduction to the present-day classical world for kids and the not-as-yet-anointed older listeners.

It is lots of fun and yet it gives some worthwhile fare, played exceedingly well. Get this to play for your kids, grandma, your neighbors or anyone you might want to get interested in the music. Recommended!