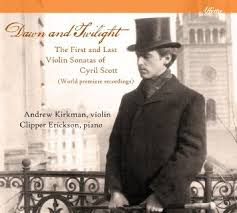 Cyril Scott (1879-1970) is a name you may not know. He gained a reputation in England as one of the finest composers of his generation. His music has since faded into the past like a photo album of yellowed depictions from a family now forgotten except by a selected few. Dawn and Twilight: The First and Last Violin Sonatas of Cyril Scott (Affetto 1504) is just what it says, world premiere recordings of these lovely works by Andrew Kirkman on violin, Clipper Erickson, piano.

To be fair, the "Violin Sonata No.1," in its original version here was written in 1910. The composer worked up a revised version in 1956, and that has received a recorded performance. But as the liners tell us, the later version was drastically shortened (coming in at around 30 minutes to the original's 40) and tightened in form. It seemingly does not quite have the youthful ardor and passion of the original. (I have not heard that version myself, but this original version sounds wholly right.)

The "Sonata No. 4" (1956) is the work of a composer in his '70s, a forgotten man. It was pretty well ignored at the time. The world had moved on and it had left Cyril behind.

In the light of today we can reconsider his music. He is being rediscovered. A number of recordings have been issued and all to the better. But for now we leave all that aside and concentrate on the works at hand. First of all I should compliment Andrew Kirkman and Clipper Erikson for their fine performances. These are works of depth and complexity. The two give loving attention to the many twist and turns, the dramatic declamatory outpourings and the dappled sunlight of the more whimsical, impressionist side of the music.

The Sonata No. 4 has a compact terseness that contrasts readily with the first. After all, 46 years intervene between the two, and the composer at his later stage remains rhapsodic but less expansive, a bit more modern, surely. It is a work that has expressive impact but less in the way of the early fireworks. There is to these ears nothing lacking. It does show a more introverted wisdom gained from standing alone, and a sharp musical focus that gives us a more controlled sense of form that is less apparent in the first.

The first sonata in contrast is a product of the composer at the height of early fame, a young lion who was celebrated as the potential leading light of his era in England. There is a certain dash, a boisterous expressionism that combines impressionist harmonies, romantic rhapsodic expression and a modern beyondness that wears well today.

In any case the highly crafted and never banal music as a whole shows rather brilliant inventive powers and a composer who deserves hearing. Any fan of the English school of 20th century composers will find this a real boon. Even those with a more general interest in the period will I believed be pleased to hear the music repeatedly. It has memorability and with the quality of the performances here offers a welcome refreshment from the usual names and works. Very recommended.