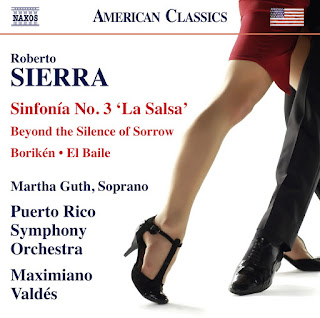 The orchestral music of Puerto-Rican born Roberto Sierra (b. 1953) comes to life in a new volume of works performed by the Puerto Rico Symphony Orchestra conducted by Maximiano Valdes. Sinfonia No. 3 "La Salsa" (Naxos 8.559817) covers the symphony plus two additional orchestral works and a song cycle featuring soprano Martha Guth and orchestra.

I covered an earlier Naxos volume of Sierra's orchestral works, including his fourth symphony, on a December 11, 2013 posting here. See that if you are curious.

The program is an excellent one. "Sinfonia No. 3 'La Salsa'" (2005) builds upon the ostinatos and melodic dance figures that form an integral part of Salsa but then ultimately treats them as symphonic themes for development in a diatonic-chromatic idiom. Sierra thus manages to capture the vitality of Latin American music while also placing it within the realm of modern new music classical. There is a toggling between the two idioms. In the end we get rhythmic excitement and vivid orchestral craftsmanship in a symphony that stands out as inspired and strongly personal.

"Boriken" (2005) works within baroque chaconne ostinato form yet puts forward a Latin tinge as well. "El Baile" (2012) returns directly to Latin American dance elements but comes to the music in differing ways from the symphony.

"Beyond the Silence of Sorrow" (2002) has at times a somewhat more atmospheric, neo-impressionist feel as Sierra sets to music six poems by American Indian poet N. Scott Momaday. There are contrasting modes based on the poems and their various subjects. The orchestral passages are nicely wrought and well orchestrated. Ms. Guth's vocals ring forth with character. It is a fine piece of work.

All four works show Sierra as a composer unto himself, a rather brilliant exponent of modernism with Latin American roots, and a master of modern orchestral textures. The Puerto Rico Symphony under Valdes sounds quite good and idiomatically conversant with Sierra's Latin-and-beyond sensibilities.

This is not avant music but neither is it engaging in much rear-view mirror gazing. It is music that should appeal to a large audience without compromising its seriousness and Latin-American vitality. Rather outstanding music, I would say. Very recommended.