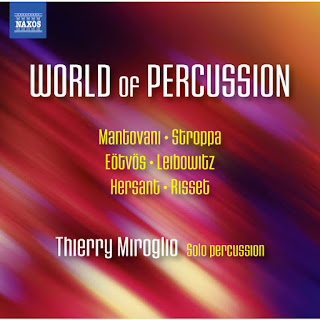 Six works comprise Thierry Miroglio's World of Percussion (Naxos 8.573520). Miroglio faces the world alone, for these works demand he tackle the parts in a solo context. That is not an unusual request in new music folds, at least not since the '60s.

The music requires a mastery of different combinations of pitched and unpitched arrays of percussion and is not at all easy to play, but the effect is not so much overtly virtuostic as it is musical.

Miroglio is no stranger to the format, with a repertoire of some 400 solo works he can perform. He concertizes frequently while also teaching at the Darius Milhaud Conservatory, where he is a full professor, and traverses the world to give master classes as he can when not otherwise preoccupied with other duties.

The disk-lengthed recital at hand covers works composed within a broad swath of time between 1966 and 2010, though most hail from the current millennium. The music draws upon a diverse world of instruments: congas, hand percussion, various other instruments and electronics in Bruno Mantovani's "Le Grand Jeu" (1999), metallic percussion and electronics in Marco Stroppa's "Auras" (1995, rev. 2005), solo bass timpano in Peter Eotvos' "Thunder" (1995), solo vibraphone for Rene Leibowitz's "Three Caprices" (1966), timbales (timpani) in Philippe Hersant's "Trois petites etudes" (2010), and an array of instruments and computer for Jean-Claude Risset's "Nature Contra Nature" (1996-2005). The latter work brings the recital to a conclusion with some outstanding timbral densities born of multi-instrumental mastery and computerized sound-worlds.

The music is modernist and occasionally somewhat ambiant with the emphasis on the myriad colors of the instruments called for. Thierry Miroglio gives it all brilliant life with an outgoing and vital musical approach.

Anyone with a penchant for percussion music and the possibilities in a modern solo context will find this music fascinating and stimulating. Miroglio is a world-class master of the art of percussing. The recital is very worthwhile!