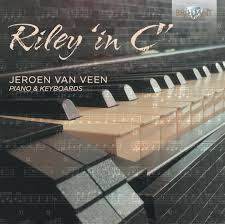 There seems little doubt at this point that Terry Riley's "In C" (1964) is the most lasting and widely admired work in the early minimalist movement. That is attested by the steady flow of concert performances and of new recordings, now all pretty substantial in number, that we have seen since the original recording came out in the late '60s under the composer's supervision.

Part of the reason for its continued popularity has to do with the open-ended quality of the work. It is for any number and quantity of instruments. It is composed, as is no doubt known to most readers, of a sequentially fixed series of diatonic motifs which each player plays repetitively, starting with the first, then moving on to the next at individual will. A good performance gives us a pulsating, shifting myriad of contrapuntal overlaps in motives. Each performance is different in that the combinations experienced have to do with the unique group interplay of close listening and individual motival shifts, with virtually infinite variations possible.

Enter Jeroen Van Veen, a pianist who has excelled at minimalist music performance. I have reviewed a good number of his recordings here (type his name in the search box for those). He is a natural, so to speak, at giving us the motor-repeat musicality and drive one hopes to hear, plus the variations in touch and phrasing one hopes for in a top-tiered concert pianist.

So it is only natural that he would record Riley 'In C' (Brilliant 95217). This is in fact his second recording of the work, longer and more involved and leisurely in its unfolding than the first, which I believe was recorded for his minimalist box set a few years ago. He chose to create this new version by multitracking several grand pianos, three electric keyboards, clavichord, four synthesizers and some other keys, laying down the work track-by-track until complete.

An all-keys version of the work has a special sound, especially in the hands of Van Veen. And for this 75-minute version there are some excellent and some interesting new (to me) contrapuntal overlaps born of his keen ear and plenty of time.

Is this version "better" than all others? Not necessarily. There is no best, really, since comparisons are based on ever-differing results in performance and the infinitely variable sound colors of the ensembles involved. The original version will always stand out for me, because like most people my age it was the first I heard and because I am so familiar with it. It became de facto definitive but not, certainly, the last word. The Van Veen version as presented here has a good deal going for it. It is surely one of the best and most interesting, especially for the keenly focused "ensemble" interplay. I would say I miss the marimbas of the original, but in fact repeated hearings of the Van Veen have gotten me used to their lack.

If you've never heard "In C" I imagine this version will give you a fine representative look at the possibilities the work contains. Eventually one should also hear the original version Riley did. For those who know "In C" intimately this version gives you a slightly different take on it. Either way at the Brilliant budget price it makes for a most stimulating and attractive, indeed a bravura performance version and you will not go broke getting it.