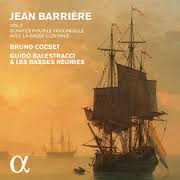 The lively virtuoso musical traditions that ultimately evolved into music for solo cello and basso continuo were in full flower by the baroque era. The music in many ways culminated out of renaissance music for viol and viol da gamba and hit new expressive heights and structural complexities in later years.

French and Italian schools were especially important. A name we are seeing increasingly often in this regard is Jean Barriere (1707-1747). Today I report in on Bruno Cocset & Les Basses Reunies with Guido Balestracci playing Barrier's Sonates Pour Le Violoncelle Avec La Basso Continue, Vol. 2 (Alpha Classics 220). The original instrument consort of solo cello, tenor violin (played by Bruno Cocset, who is also director of the ensemble) or Pardessus (Guido Balestracci) plus the basso continuo variously composed of harpsichord, cello, double bass and theorbo realizes in the second volume five sonatas for the cello and two for the pardessus (a cousin to the cello which has five or six strings and a fretted neck), plus a couple of worthy harpsichord solo pieces for good measure.

What is striking about this music when played on original instruments with period gut strings and the bow used at the time is the beautifully resonant sound given out by the solo instrument and the ensemble as a whole. Les Basses Reunies, Cocset and Balestracci have that unearthly period sound and so make of the Jean Barriere pieces all they should be.

The music is alternatingly jaunty or supremely lyrical, always captivating. In the hands of Les Basses Reunies we hear Barriere in all his glory. There are questions raised by the music as to which cello Barriere had in mind in each case. I will refer you to the liner notes for a full discussion on the matter, but suffice to say Cocset resorts to the tenor cello in F for one of the sonatas, otherwise sticking with the standard cello in C. The cello and pardessus solo parts are played with a beautiful artistry and impeccable technique in any event.

Anyone already conversant with other French and Italian grand masters of the baroque cello will find that Barriere holds his own in these works. The ensemble gives us outstanding performances with that uniquely sweet and resonant original instruments sonics. Volume two is a beauty. I suspect the same would be true of the initial volume, though I have not heard it as yet. Enthusiastically recommended!