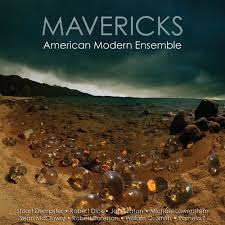 Iconoclastic US composers-performers are in the spotlight on the American Modern Ensemble's Mavericks (AMR 1041). The subtitle reads Innovative Composer-Performers Who Think Outside the Box, and that is most appropriate since the ten works represented include eight brilliant musical thinkers of our time giving us some original and provocative music that is deeply intertwined with the innovative performance approaches of each. In every case instruments are extended beyond conventional limits, given heightened technical demands and combined in some cases with electronics which act to push the sonic boundaries in advanced directions.

The program came out of the AME concert Musical Mavericks held in New York City, 2007, a gathering of the seminal composer-performers as represented on the record, each providing one or more examples of their art. The plan was to release the concert recording as the album at hand. But since some of the composer subsequently revised and/or re-recorded the pieces performed, the album consists of some of the music as it was presented in the concert, substituting newly recorded or recently recorded versions of the other works for the most up-to-date results.

That works quite well, as it turns out. We hear ten considered and considerable works in all: Michael Lowenstern's "Spasm" for bass clarinet and electronics, Pamela Z's "Declarations in the First Person" from "Timepiece Triptych" for voice, bodysynth MIDI controller, processing and electronics, Sean McClowry's "April 94" for double bass and electronics, Robert Dick's "everyone@universe.existence" for flute, speech and recorded sound plus his "Sliding Life Blues" for flute with glissando headjoint, Robert Paterson's "Komodo" and "Piranha," each for five octave marimba played with six mallets, the late John Eaton's "Microtonal Fantasy" for two pianos tuned a quartet-tone apart, " William O. Smith's "Sumi-E" for clarinet and computer-transformed sounds, and finally Stuart Dempster's "Matthew, Can You Sperry Me Again?" for trombone.

Many of these works have a sort of performance art element that relates back in part to such things in the plastic arts and at times to avant garde jazz. In each case the performative fingerprint of each composer is uniquely apparent and in many ways irreducible from the compositional-performative presence of the music. That is not to say that some of these works will not have a performance life beyond the active participation of the author, but yet the definitive "autograph" version as it exists at the time of each recording is paramount.

And so the ten works provide us with a fascinating program of avant music that jumps out of a frozen world of notation and scores to breath the life of a personal immediacy, a singular personal presence. The music speaks to us with the here and now of each artist.

It is a compilation that stands out as an important documentation of the present-day modern music panorama of performance art, but also provides the excitement and pleasure of the creations in ways that will find you drawn back into the program with ever-renewed interest.

It is a testament to the creative, living presence of eight innovators. All who have an interest in the modern new music of today will no doubt find it revelatory and excellent listening.