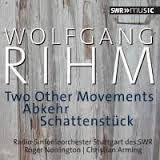 Wolfgang Rihm (b. 1952) has gained a deserved reputation as one of Europe's finest living composers, with an extraordinarily productive output and music that has an expressionist modernist slant, that captures the essence of pre-serialist orchestral tradition yet moves the music forward into avant territory in no uncertain terms.

SWR Music has embarked on an ambitious series of recordings of Rihm's music, the latest of which I have been listening to. I refer to the Radio-Sinfonieorchester Stuttgart des SWR's recording of Two Other Movements, Abkehr, Schattenstuck (SWR Music 19001CD). It constitutes Volume 7 of their Rihm Orchesterwerke series.

The three works are captivating examples of Rihm at his best, music without flaw, exciting music, performed with acuman and zeal under the conductorship of Roger Norrington (for "Two Other Movements") or Christian Arming (for the others).

"Two Other Movements" (2004) enjoys its world premiere recording. In spite of its casual sounding title it is a substantial work lasting some 35 minutes. It is a veritable symphony in its girth, filled with expressive orchestral gesture and dramatic contrasts.

"Schattenstuck" (1982-84) is an earlier masterpiece that has a brashly bold demeanor and a moody countenance. The orchestration is brilliant.

"Abkehr" (1985), another world premier recording, is brief but contentful, serving as a worthy transition between the two landmark end-pieces.

In all we get some beautifully characteristic Rihm, fully modern, fully original and performed with genuine sympathy and zest.

If you are unfamiliar with Rihm this is a fine starting point. If you are an enthusiast you will appreciate this volume quite a bit. But really any follower of the modern scene should hear this music. Essential listening!