International Contemporary Ensemble, On the Nature of Thingness, Music by Phyllis Chen and Nathan Davis 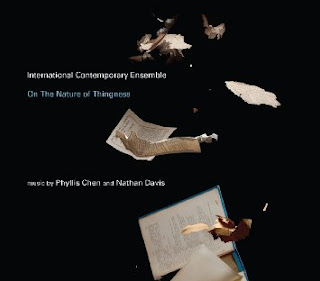 Some new music feels natural, organic, yet in no way precisely "traditional." I feel that way about the new disk by the International Contemporary Ensemble, On the Nature of Thingness (Starkland 223). It is a series of seven compositions by Phyllis Chen and Nathan Davis. It is a series of vividly colored works for various chamber configurations. The title work by Nathan Davis is for a small chamber orchestra. All of the music speaks the language of modern contemporary music today but in each case with a lucidly original voice.

The ICE shows on these performances that they are in every way an ensemble that provides us with sensitively alive performances of cutting-edge music.

On two works an electronic component complements solo instrumentation to excellent result. Nathan Davis and his "On speaking a hundred names" for bassoon and live processing matches up with Phyllis Chen's "Beneath A Trace of Vapor" for flute and tape. Each builds a universe of sound out of the performatives of the instrumentalist and electronics that extend the sound and give it a thickness appropriate to its engaging dramatics.

The largest and longest of the works is the Davis "On the Nature of Thingness" for soprano and 12 instrumentalists. The scoring includes ten jaw harps, mostly in a doubling role, and winds and strings for a sound thoroughly modern but with its own special declamatory presence. Tony Arnold sounds very convincing in her vocal role. The work spawns the mysterious nature of things and their concretization in sound. The jaw harps en mass give the listener an uncanny experience, but the whole work comes to life in intriguing ways throughout.

Inimitable, familiar yet exotically evocative sounds carry the day--from prepared piano (on Davis's "Ghostlight"), pianos, toy pianos and music boxes (on Chen's "Hush"), tuning forks, toy glockenspiels, violin, clarinet and toy piano (on Chen's "Chimers"), music boxes and electronics (on Chen and Robert Deitz's "Mobius"). The works get in each case a synthetic blend that reveals vivid sonic associations yet points us to the new possibilities inherent in the unusual mix of sounds as structured by the composers.

ICE's leader Claire Chase gives us food for thought about the composers in the liners. She sees Chen as a "magician" in her ability to "re-appropriate instruments" and lead us "back into the daunting and wondrous solitude of our childhoods." Davis for her "shine[s] a light on a natural element," in his music here, "revealing a breathtaking world of poetry that lies just beneath the surface." Amen to all that.

These are marvelous performances of special modern works that revel in brightly colored associative tone painting. It's an extraordinarily delightful program, recommended to anyone who seeks the best in contemporary sound color works today.

The album is due out on February 26, 2016. If you are reading this ahead of time you can pre-order the album at Amazon by clicking on the following link: http://www.amazon.com/On-Nature-Thingness-performs-Davis/dp/B01AU0WY4Y