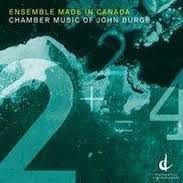 I sometimes recall an experiment I learned about in psychology class in college. A group of dogs are shown one image and then given something to eat. They are shown another image and get a mild shock. The experimenters gradually alter each image so it more and more resembles the other. The more they are similar, the more the dogs are discomfited, not knowing what is going to happen.

Life can be like that. Not exactly, but for example a music that is not quite modern, plain and simple, and not quite neoclassical or neoromantic is a little harder to write about than music firmly in one camp or another.

I feel somewhat that way about Chamber Music of John Burge (Centrediscs 21715). The gifted chamber Ensemble Made in Canada perform three Burge works for us to experience on this album. They make the music sing. Angela Park is the pianist, Elissa Lee is on violin, Sharon Wei is on the viola, and Rachel Mercer is the cellist.

Not that the music makes me uncomfortable, far from it. It is music of great dramatic range and depth, located somewhere in the interstices between the modern aspect of postmodernism and the neoclassic/neoromantic strain today. What matters is that the music is well-crafted, inspired and lively.

John Burge was born in Ontario, 1961 and spent his early years in Calgary, where he began piano studies. After attending the Universities of Toronto and British Columbia, where he obtained degrees in theory and composition, he has gone on to teach, is a full professor at Queen's University in Ontario, and has spent much of his time amassing a sizable and impressive body of original works, for which he has received acclaim, recognition and numerous awards.

The three works included on the current program offer a window onto the mature composer, the meticulous and inspired craftsman-artist that is John Burge today. The program begins with two works for smaller chamber aggregates--"Pas de Deux" (2010) for violin and piano and "String Theory" (2011) for viola and piano. The works themselves are substantial but also serve to set the stage for the "Piano Quartet" (2012), which to me is the most impressive of the three.

The Quartet gives us a shifting focus of moods and expressivity in the three movements involved. The second movement centers around lyrically passionate mystery; the outer movements have a rousing rhythmic energy and part writing that plays the piano off of the strings as aggregates and individually, all in ways that immerse you continuously in a grand wealth of thematic invention.

Throughout there is the spice of chromatic modernism, classical developmental presence plus a neo- and post-romantic passion that come together convincingly and individually.

Ensemble Made in Canada do much to communicate the excitement and depth of the music. They are a first-rate ensemble who play with great conviction and elan.

The combination of Burge's dynamic individuality and the Ensemble Made in Canada's brio and brilliance make for a real winner. Bravo!