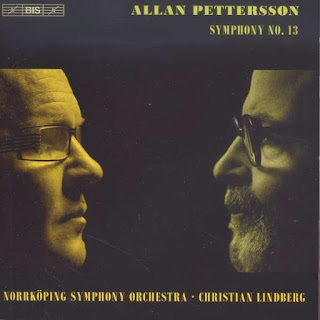 Allan Pettersson (1911-80) was undoubtedly one of Sweden's truly great modern symphonists, yet his music continues to generate controversy. Not considered a cutting-edge modernist during his lifetime, compared with, say, someone like Blomdahl, firmly staying with the symphony format when it seemed old-fashioned, yet writing music that did not appeal to traditionalists, he on principal refused to "follow the rules" on either side of the divide and so did not garner as large a following as he might. Today nobody cares that he did not write serial music and yet his music tends to be single-mindedly uncompromising so that those looking for recognizable pedestrian themes or a pleasant go of it tend to shy away. But it is to their loss.

Indeed, his Symphony No. 13 (1976) (BIS 2190), as recorded by Christian Lindberg and the Norrkoping Symphony Orchestra, proves to be monumental but difficult, 66 continuous minutes of supercharged, turbulent chromatic symphonic storms with nary a life-preserver in sight. In that way it is seminal mature Pettersson, with no concessions to audience expectations, an endless stretch of endless melody and thickly textured orchestration, expressive like nobody else before or after.

Lindberg and the Norrkoping Orchestra seem the ideal interpreters of his music. I covered their recording of his 9th here on April 10th, 2014 and was mightily impressed. The 13th confirms their prowess at bringing out the full scope of the composer.

Inevitably his long and painful bout with arthritis and his resulting invalid state for much of his later years has served to explain and sometimes to dismiss the music he produced. But it does not, though it does cast a heroic light on his persistent productivity. This is not a musical transposition of his illness. It is what he did in spite of it.

With music of such unrelenting strength and turbulence, many people feel the need for a programmatic explanation. To me this is music that struggles through a darkness of collective spirit and works its way beyond it as an affirmation of the will to transcend it all.

But even so this is a wonderfully extreme work. If you do not surrender yourself to it you will doubtless feel adrift. It is one continuous development, a long variation on itself, a deliberately ambiguous thematic macrocosm of unfolding form-in-motion. It is not music to take lightly. There is a determined, rather stern sound to it. If you allow it to have its way with your listening self it takes you to a place wholly original. The stern quality should not put you off. Bach, after all, could sound stern.

In fact it is a monumental symphonic gesture of the end of last century. Pettersson struggled mightily to create a masterpiece, to create with overwhelming sincerity a body of work that owes its life force to no one but Maestro Pettersson. That he created his own unique musical worlds against all odds we can only be thankful for.

You will need to hear this symphony a good number of times before it truly comes alive, given its unending torrent of unfolding. Once you give it your time it rewards with modern music at its most profound.

If you are up for the challenge, Lindberg and Norrkoping present a beautiful reading that rewards a concentrated immersion. It is seminal Pettersson! Highly recommended for those fearless modernists out there!