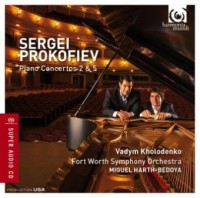 I must admit to start this review that I appear before you today with extreme prejudice. Prokofiev's "Piano Concerto No. 2" is my favorite Prokofiev work, and I would single it out as a favorite of mine from all the 20th century modern concertos I know. Now I may be the only one that puts this music on such a high pedestal, and if that is so it is of no importance to me. A beautifully lyrical, turbulent, bitterly dark work, it speaks to me after 100 years as strongly as it did when I was dutifully getting my hands on all the Prokofiev I could back around 1971. I found an LP with Karel Ancerl and the Czech Philharmonic doing it with pianist Dagmar Baloghova in 1963 on a US budget label that re-released Supraphons. It immediately captured me and I've been listening ever since. I've never quite found a version that compared with it for its brooding qualities and the full flush of its extraordinary outbursts, that is until now.

2013 Cliburn Gold Medalist Vadym Kholodenko is the pianist, the Ft. Worth Symphony the orchestra under Miguel Harth-Bedoya. This a SACD compatible disk that brings us the Prokofiev Second as well as the Fifth (Harmonia Mundi HMU 807631).

The "Piano Concerto No. 5" is not as well known but has its own charm. Kholodenko and company do an excellent job with it and so it is here a worthy coupling with the Second.

But I am especially thrilled with their performance with that Second. It has beautiful sound. It rivals and even exceeds my old Artia LP for its idiosyncratic, gloriously melodic darkness. Now maybe I am one of those who is glad to be unhappy, but I think not. Because Prokofiev transcends the turmoil and the darkness with some of the most beautiful music I know. You come away from the work feeling that Serge has dispelled the storm clouds, that with music such as this we can carry on and be wonderfully human, somehow.

Kholodenko understands all that, I think, and manages to convey through the formidably compelling solo part that the orchestral girth and power can be coalesced and contained by the single solo voice. I wax on here but if you hear this recording a few times I think you might understand. Prokofiev especially in the early period was a master of the motor impulse rhythms that for him connoted perhaps upheaval, progress, change, industry, a modern world he occupied with a certain insecurity natural to the times. The Second captures that wonderfully. But it also has in wonderful form his melodic genius, something Prokofiev put forward beautifully throughout his career, but never more memorably than with this concerto. The melodic arc of solo part and the impassioned thrumming of the orchestral backdrop is unforgettable, to me at least.

The version contained in the new disk I would recommend as essential, and for the 5th too this disk is fabulous. Get this one!