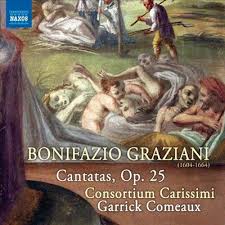 We return to the music of Bonifazio Graziani (1604-1664) with another engaging volume by Consortium Carissimi under Garrick Comeaux. Cantatas, Op. 25 (Naxos 8.573257) gives us a goodly assortment of 12 such, all in world premiere recordings. It affirms his stature as a composer of great skill and expressive elan, a jewel in the crown of the mid-seventeenth Italian baroque.

I covered his earlier volume several weeks ago (see the index). His position as maestro di cappella in Rome's Jesuit Church during a creative period in sacred music helped him as the need for new liturgical music was acute. Thanks to place, time and talent he was a key member of the "School of Roman Polyphony." This set of cantatas (which functioned in the liturgy as motets) was published in 1678 and gives us a wealth of examples, all in concertate manner with the inclusion of, in various configurations, archlute, theorbo, viola da gamba, sackbut, harpsichord and/or organ. The vocal parts vary from solo motets for a single voice, to those for two voices, three voices, sometimes in the form of dialogues, and one for three sopranos and tenor. The consortium gives us, due to space considerations, 12 of the total of 14 works here. They are very worthwhile.

Subject matter varies between Lenten and Christmas themed works and those that fall somewhere in between. All have a beautiful ambiance heightened by the stringed accompaniments; the consortium gives us the period sweetness that marks the music as singular along with the line-crafting brilliance of the composer.

In the end one is moved, ravished and delighted by these miniature masterworks. It affirms, perhaps even more definitively than the earlier volume, that Graziani was a fine composer, fully worthy of our appreciation as a master of the concertate style, a creator who holds his own as a singular voice of the period. The Consortium Carissimi gives us readings of world-class depth and attention to detail. Anyone interested in early music will not fail to appreciate this disk, and fledglings to the spectrum of early baroque will I do not doubt be intrigued as well. Highly recommended.
Posted by Grego Applegate Edwards at 5:25 AM