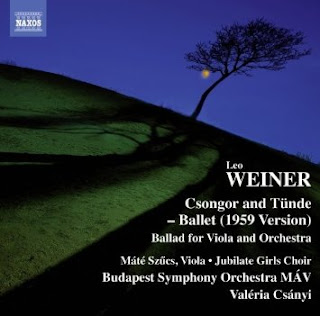 Chances are good that if somebody asked you to, quick, name a great composer, you would not immediately answer "Leo Weiner" (1885-1960). Part of that reflects the obscurity of his career to those of us at least outside Hungary. During his lifetime there he was well-respected as composer and composition teacher at the Liszt Academy in Budapest, where he reigned from 1907 until his death, teaching most all of the composers of note that followed in Hungary. Before that he was the pupil of Janos Koessler, who also taught Bartok, Kodaly and Dohnanyi. Weiner is perhaps best known for the scherzo "Prince Csongor and the Goblins" and the Suite from the same ballet, Csonger and Tunde. For the current recording we have a reading of the complete ballet  from the revised 1959 score, a first recording, and his Ballad for Viola and Orchestra (Naxos 8.573491), also a first recording in this form (see below).

Both are well-played by Valeria Csanyi and the Budapest Symphony MAV, with Mate Szues nicely taking on the viola solo role for the "Ballad" and the Jubilate Girls Choir sounding angelic on the ballet.

Weiner makes use of folk material in much of his music, and you can hear thematic elements that have that ring to them in these two pieces. That he neither sounds like Bartok or Kodaly is a credit to his way with the themes. The liner notes speak of his synthesis of Schumann and Mendelssohn with modern European influences and a Hungarian nationalist tendency. I would not say I didn't hear that in these works, but there is also a sort of neo-impressionist glimmer (which, yes, you can hear prophetically in Mendelssohn's "Midsummer Night's Dream").

The "Ballad" was originally intended for clarinet and orchestra; actually a first version was for clarinet and piano, with a viola part included as an alternate, this in 1908. Weiner orchestrated the music twice and it is the second from 1948 that we hear with the viola part for a first recording. The music is rhapsodic without a touch of mawkishness, a rather pronounced impressionistic flavor to it and a memorability that marks Weiner an excellent melodist--but then that is also true of "Csonger."

The ballet, originally written in 1913,  has 14 movements, the outer ones featuring the girl's choir.It is music of great charm, well orchestrated, thematically alive.

In Weiner we have someone who avoided later modern trends as a whole, staying with the classical music-Hungarian music nexus as he embraced it early in life. So both works have their origins in his first flush of recognition in the early years of the century and aside from undoubted refinements in the recrafting of later versions, keep that initial synthesis intact and alive for us to appreciate.

This recording piques my interest. I'd like to hear more of Weiner's music. Anyone with an interest in 20th century Hungarian composers would find this rewarding and illuminating, and, for that matter, so would the general classical enthusiast. The performances give us the music in the full flush of its springtime bloom. Nicely done!
Posted by Grego Applegate Edwards at 5:40 AM