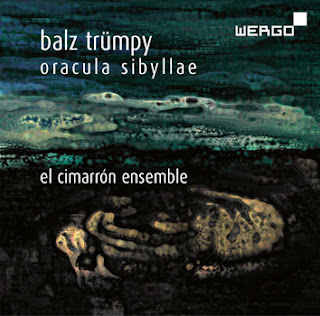 Judging from the liner notes to Balz Trumpy's Oracula Sibyllae (Wergo 7335-2), Trumpy is a complex product of two main factors: the geographic panorama of the Swiss Canton Glarus, a flat space surrounded on three sides by mountains, and the attraction for him of Ancient Greek gods and myths.

Music being the abstract art that it is, you might listen to Oracula Sibyllae a number of times without the slightest inclination to hear that in the music, especially if you did not read the liners right away. It matters little. The music speaks to us nonetheless with an eloquence far beyond the verbal.

We are firmly in chamber territory on the five compositions featured here. "Ballade" for solo acoustic guitar, "Cinque Pezzi" for marimba, "Aeolian Song" for flute, "Vier Duette" for marimba and guitar, and "Oraculae Sybillae" for soprano, baritone, flute and percussion--all establish Trumpy as a composer who carefully works within a modern vocabulary to establish intricate realities that bring forward the idiomatic characteristics of each instrument and voice.

Trumpy has a voice. Of that there is no doubt. The program on this disk demands concentrated listening. It rewards the effort with some deep explorations brimming over with an intense brightness. Hear this now if you seek something different in the new music realm.
Posted by Grego Applegate Edwards at 5:22 AM