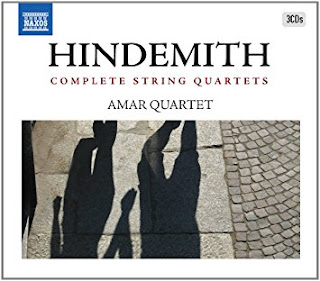 All mark significant moments in his growth toward stylistic sublimity, toward an ideal of striking motival exceptionality and development, tightly conceived art expressions of his personal brand of avant neo-classical modernism.

The Amar Quartet gives us thoughtful and energetically dynamic readings of the seven quartets in a Naxos box set. There may be more brilliant interpretations of some of these works but taken as a whole the Amar versions are very faithful to the composer's vision and a real pleasure to experience.

There is a treasure trove of vintage Hindemith to be heard in this complete opus. Hindemith himself was a very accomplished violist. His presence in the acclaimed original Amar Quartet during his German period uniquely situated him to think in quartet terms. The quartet cycle that came out of this intimate working familiarity was surely one of the finest of the last century. Some 55 years after his death the quartets sound as fresh and vital as ever. The Amar version at the Naxos price makes it very attractive indeed, an essential element in your 20th century chamber collection.

Kudos and bravos!
Posted by Grego Applegate Edwards at 5:14 AM