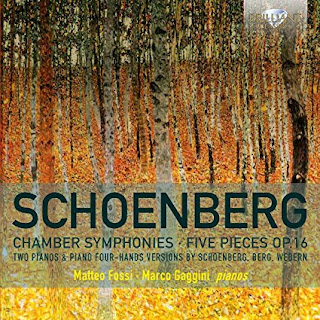 The contingent of Arnold Schoenberg and his students Alban Berg and Anton Webern did as much or more than anybody to shape the modern classical world in the early-to-middle twentieth century and beyond. Schoenberg was the lynchpin of the three, of course, though Berg and Webern each made of it all something extraordinary in their own right. Schoenberg's Chamber Symphonies & Five Pieces Op. 16 (Brilliant  94957) were landmark achievements in the movement away from conventional tonality but also compellingly significant as absorbing listens in themselves today.

Matteo Fossi and Marco Gaggini bring us spirited and idiomatic readings of the piano versions. What is remarkable especially is how, stripped of the orchestral tone colors and boiled down to their essences, each work exhibits its harmonic and melodic brilliance like a old master painting cleaned and scraped bare of yellowed varnish and grime, exposed to our view once again the way the artist originally conceived it. That of course is not to criticize the orchestrations so much as to underscore how hearing these versions renew for us the hearing of the vitally new, the revolutionary core of the works as they sounded to listeners then.

The experience of listening to this disk has been revelatory to me. There in short is a wealth of naked musical truth that showcases Schoenberg's remarkably forged vocabulary as if for the first time. Nothing can quite compare. Fossi and Gaggini bring a new brightness to these works and in their hands the transcriptions themselves are almost startling to hear now.