Stephen Hartke, The Ascent of the Equestrian in a Balloon 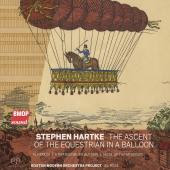 There are musical composition personalities out there today who boldly go their own way, showing us a modern return to tonality with a very personal passage through the musical thickets of contemporary possibilities. Such a one is Stephen Hartke (b. 1952), who brings his originality very much to bear on the recent album The Ascent of the Equestrian in a Balloon (BMOP Sound 1052). It is another cornerstone in the Boston Modern Orchestra Project led by Gil Rose.

From the start of the album and the title work we hear an American orchestral master in his own right. "The Ascent of the Equestrian in a Balloon" (1995) is a descriptive excuse for a vibrant character piece. Like Honegger's "Pacific 231" it delves fully into a journey (here in a hot air balloon) while using some striking orchestral sonarities that in the end are unforgettable. The opening chords utilize brass and strings and paint a setting with brilliance. It goes on from there in very memorable fashion.

"Alvorada: Three Madrigals for String Orchestra" (1983) has a very different aural fingerprint, an old-in-the-new modern panorama of searching string parts that manage to evoke old music yet have a beautifully affective newness about them.

The four movement "Brandenburg Autumn" (2006) brings yet another character study vividly to life with deceptive ease. The eloquent musical discourse seems effortless but must have entailed a good deal of craftwork. Hartke's mastery of orchestration allows him to unravel complex strands of tone and timbre, with each movement capturing a distinct mood and imagery, once again calling upon early music allusions, here Renaissance to Baroque, to paint lost time and seasons with poetic grace and originality.

"Muse of the Missouri" (2012) changes the pace for an evocative orchestral essay with a strong flavor of Americana but squarely unfolding with Hartke's pointed quasi-impressionistic, then rhythmically strong focus on melodic clarity and musico-logic poeticism. Ives' "Central Park in the Dark" may be a significant precursor in the mysterioso opening and closing passages, yet Hartke carves out his very own vistas. It is an ear opener!

Hartke in the liners underscores the importance of melody to his style. You can hear that in all four works as a return to motival essences. Nonetheless the sum total of 20th century developments somehow figure in the way he rethinks what it means to be modern today. That he goes beyond to find his own expression is clear and enormously attractive.

These four works stand out as very Hartkean ways to create distinction out of the potential maelstrom and chaos of contemporary possibilities. Ascent of the Equestrian unapologetically carves out a very immediate style that is easy to appreciate yet bears close scrutiny.

A real stand-out! Hartke must be heard.