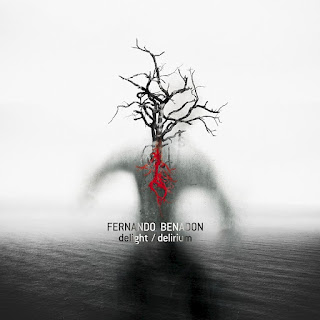 Fernando Benadon on Delight/Delirium (New Focus Recordings 179) constructs robust chamber works that are firmly in the new music camp but also have jazz/improvisational elements. Each piece is intricately and satisfyingly built out of finely conceived elements.

The largest ensemble at play occurs on "Cosmicomics" (2013) a brightly shimmering work performed by the Illinois Modern Ensemble as conducted by Stephen Andrew Taylor. As of many works here it is of literary inspiration, depicting two scenes from Calvino's tale of the same name. It has like the other works in this anthology an original feel derived from careful, effective scoring, here for the amassed winds and strings. There are modern, tonally advanced intersections, clusters and expressively wrought foreground elements that altogether create a multidimensional matrix.

The works for smaller groups have a special presence as well whether it is a matter of the early-jazz/new music inflected "Bugi Wugi" (2007) for solo piano or the other small-scale works I am about to describe. "Corxes" (2013) represents a whirl in a car through Barcelona on an early spring afternoon. A feeling of time and space in motion is heightened by rhythmically charged passages for sax, vibes, harp and piano.

"Delight/Delirium" (2016) again makes use of a literary theme, this time from Neil Gaimon's Sandman series, to create a lively matrix of movement for flute/piccolo, clarinet/bass clarinet, harp and piano.

"Rhythmensional" (2015) builds around a jazz-rock drum solo recorded as an improvisation by Dafnis Preito. Benadon takes that initial track and scores very dynamic parts for bass clarinet, viola, vibes and piano. A music of very great rhythmic vitality results, a one-of-a-kind intersection led by the complex drumming and turned into a marvelously intentional new music with perhaps only Frank Zappa as forbearer of this stylistic complex.

It is a fitting conclusion for what is an extraordinarily captivating program. Benadon knows what he is after and realizes it in five movingly fresh works. It is one of the best sort of collisions of jazz-rock influence and new chamber music I have heard in the past decade.

And so I do not hesitate to recommend this to you without reservation.


Posted by Grego Applegate Edwards at 11:26 AM