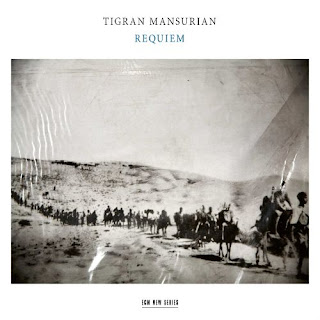 Armenian lyrical composer Tigran Mansurian chimes in with a remarkable Requiem (ECM New Series 2508) dedicated to the victims of the Turkish genocide against Armenians (1915-17). There is a haunting aura about it all, born of  heartfelt sorrow and the melding of traditional Armenian modal byways and Western modern and early music elements.

On the surface of it such combinations are not surprising, but then this music is inspired. The RIAS Kammerchoir and the Munchener Kammerorchester under Alexander Lienreich take advantage of the spacious ECM production values to create a remarkable sonic aura that gives maximum expressive reflectiveness.

The various movements of the Requiem Mass have each their own beauty, regret and sorrow being of course a common denominator but expressive power and tenderness holding sway in contrasting ways.

After all has ended one feels like one has been subject to a ghostly visitation, an otherworldly presence of the long deceased victims, while alternately agitation and an unearthly peace reigns, There are few contemporary choral works more moving and singular than this. Performances are as close to perfection as one might dare to expect for such a new work.